The Bold and the Beautiful Spoilers: Flo Wants to Be Surrogate for Hope and Liam, Ease Beth Pain?

BY Heather Hughes on March 5, 2019 | Comments: one comment
Related : Soap Opera, Spoiler, Television, The Bold and the Beautiful 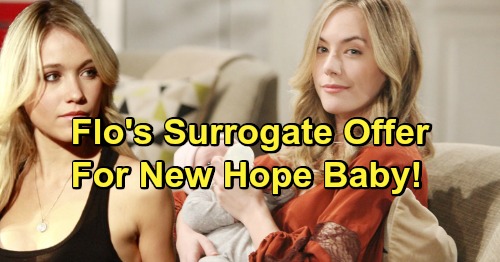 The Bold and the Beautiful (B&B) spoilers tease that Florence “Flo” Fulton (Katrina Bowden) will try to ease the burden of what she’s done. She hates that she contributed to Hope Spencer’s (Annika Noelle) heartache, so she’ll do her part to ease it. During their upcoming dinner party chat, Flo will urge Hope to have another child. She won’t want Hope to give up on the idea of a family.

However, Hope’s lost two babies already, so the idea of trying again seems daunting. She doesn’t know if she could live through that kind of pain again. This nightmare has really taken a toll on her, so Hope may shut down Flo’s suggestion and contend that she’s not meant to be a mom.

Of course, that would only add to Flo’s guilt. The Bold and the Beautiful spoilers say Flo will nearly blurt out a confession at the gathering, but she’ll back out at the last second. Still, Flo’s mouth certainly won’t be glued shut. She’ll be on the verge of cracking at any moment, so Dr. Reese Buckingham (Wayne Brady) will have to keep her under control.

During the week of March 11-15, Flo will give Reese a stern warning. She’ll let him know she can’t take it anymore, so he’ll be on edge over what she plans to spill. Zoe Buckingham (Kiara Barnes) may rev up her efforts to keep Flo quiet, but she’s obviously struggling to handle her. She won’t be able to control any future decisions Flo might make.

How far will Flo go to make up for her terrible lies? Could she offer to be a surrogate for Hope and Liam Spencer (Scott Clifton)? Since Hope’s concerned about another miscarriage or botched delivery, Flo may think she could make this easier. She could be the one to bring their new little one into the world and secretly lessen her own guilt over Beth Spencer.

This would be an excellent B&B story development for several reasons. For starters, Hope and Flo would form a deep connection over this. There’d be more chances for slipups, which would put Hope and Liam closer to the truth.

It would also allow Hope to start feeling more hopeful about the future. It could even cause conflict with Liam since he’ll face suspicions about Flo. He may not be on board with Flo as a surrogate, so Hope might feel like he’s robbing her of a shot a motherhood.

Plus, it could open up a can of worms regarding Flo’s reproductive history. Since she hasn’t actually given birth, that’s something that could accidentally come out through her OB-GYN. What if for whatever reason, Flo isn’t capable of carrying a baby? This is the kind of thing that could give Flo more secrets to keep, which would be good for drama’s sake.