The Bold and the Beautiful Spoilers: Flo’s Biological Father Reveal – The Apple Doesn’t Fall From The Tree? 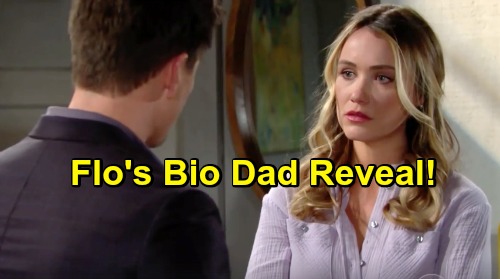 The Bold and the Beautiful spoilers tease that the identity of Flo Fulton’s (Katrina Bowden) father will be confirmed in the near future. Who this man most likely is remains the question as of early April in Los Angeles, California.

Unless Wyatt (Darin Brooks) isn’t Bill’s (Don Diamont) biological child, Flo will not be revealed as Dollar’s daughter. While Quinn (Rena Sofer) will naturally be very concerned about this possibility, based upon Shauna’s (Denise Richards) interaction with Bill, this chance will almost certainly be nixed shortly.

Savvy soap fans are right to wonder if the storyline that served to introduce Flo is also part of a deeper storyline, meaning that one of the connected characters in the Beth-Phoebe arc is linked to her dad.

Hope’s (Annika Noelle) father is Deacon (Sean Kanan). Considering Mr. Sharpe’s romantic history, on both B&B and on its parent show, The Young and the Restless, he’s an easy paternity point to consider.

If Flo is revealed as a Sharpe, then simultaneous sibling friction would be established. Hope would learn that this sudden sister went along with a diabolical plot for money. Then, Flo knowingly allowed Hope and Liam (Scott Clifton) to continue believing Beth had died, with no plan to ever state the truth.

Deacon’s criminal penchant would also be seen as existing inside Flo. That link wouldn’t afford Bowden’s character access to benefit of the doubt, or needed legal support.

Quinn’s husband is another possibility. Eric (John McCook) already has a large family and has been involved with many impressive ladies. A scenario where the patriarch of the Forrester clan is identified as Flo’s father would give Quinn an unexpected stepdaughter and Steffy Forrester (Jacqueline MacInnes Wood) a very unexpected aunt!

This type of reveal would provide Flo with an influential supporter. Eric would surely want to keep his daughter out of prison and could fund needed legal support and leverage VIP connections to potentially make that happen.

Ridge (Thorsten Kaye) is another paternal option. The current interference Brooke (Katherine Kelly Lang) is running with Taylor (Hunter Tylo) where Hope is concerned would also be applied to Flo, after she’s revealed as being part of Reese’s (Wayne Brady) baby-swap. This would also be another wedge issue that would weaken Bridge.

There are certainly many other characters that haven’t been referenced, including former personalities, or those that could be invented. But having Flo’s dad be revealed as a currently connected B&B character would serve to check a number of strategic daytime boxes.

Who do you think will be revealed as Flo’s biological father? CDL is a leading source for everything linked to The Bold and the Beautiful. Check back regularly for B&B spoilers and news!