The Bold and the Beautiful Spoilers: Flo’s Next Nightmare as a Logan – Brooke Fights To Get Phoebe Back From Steffy? 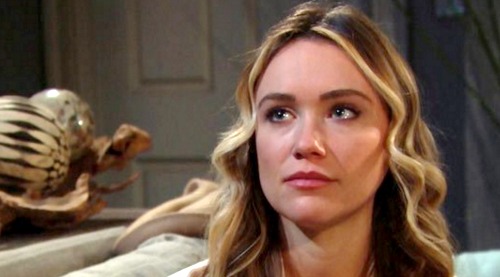 The Bold and the Beautiful (B&B) spoilers tease that Florence “Flo” Fulton’s (Katrina Bowden) may wish she’d listened to her mom. Shauna Fulton (Denise Richards) warned Flo that she shouldn’t dig for details on her father. That’s because she’s always assumed Bill Spencer (Don Diamont) was the most likely option.

Since Storm Logan (William deVry) was actually Flo’s bio dad, that should fill Shauna with relief. However, it’ll only bring more stress for Flo. She felt bad enough about duping Hope Spencer (Annika Noelle) and letting her suffer without her daughter.

Now Flo’s actually going to be related to her! She’ll be welcomed to the Logan clan with open arms, so you can imagine how much of a guilt trip this will be.

Of course, guilt won’t be Flo’s only problem here. In addition to Hope, Flo will have a flood of other family members who now want to get to know her. They’ll naturally want to get to know “Phoebe Forrester” (Isabella de Armas and Redford Prindiville) as well.

We can’t forget that since Flo is “Phoebe’s” fake birth mom, “Phoebe” will become part of the Logan family through Flo.

“Phoebe” already has a Logan link through Hope, but no one knows about that yet. Flo will try to keep everything under wraps, but it should become more difficult with all these meddling Logans. They’ll all be asking questions and hoping to spend time with “Phoebe” when she returns with Steffy Forrester (Jacqueline MacInnes Wood).

Since Brooke Forrester (Katherine Kelly Lang) and Dr. Taylor Hayes (Hunter Tylo) are such fierce enemies, B&B will inevitably keep finding ways to rev up their feud. Will Flo and “Phoebe” fit into their next battle? Nobody would put it past Brooke to find some legal loopholes and suggest Flo deserves her child back.

Flo would obviously shut that down and insist that Steffy is “Phoebe’s” mother now, but Brooke could still bring more issues for her. The Bold and the Beautiful spoilers say becoming a Logan won’t be a good thing – at least in terms of the pressure Flo’s under. Her secret is destined to blow eventually, so this family twist could be what ultimately leads to it.