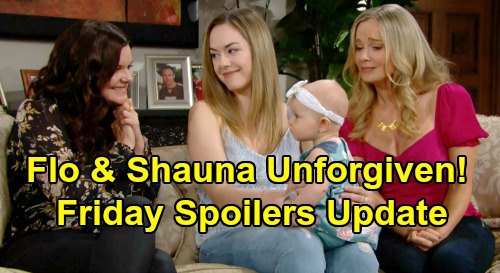 Shauna will decide to accompany Flo to the cabin and try to get through to Hope. They surely won’t expect Hope for just forgive and forget, but they’ll think she should at least hear their side. Flo may worry about this backfiring, which is a valid concern. Even so, Flo will be desperate to have her point of view shared and considered. She’ll just want to give Hope a heartfelt apology and plead for mercy.

Shauna will want to provide some backup and deliver an apology of her own. She didn’t take on as big of a part in this since she simply kept quiet, but that was bad enough. Anyone who could stand by and knowingly let a woman grieve for her child deserves some criticism – and Shauna will get plenty of it! The Logan sisters will soon show up to make this cabin confrontation erupt into chaos.

After Hope blasts Flo and Shauna, Brooke will arrive along with Donna Logan (Jennifer Gareis) and Katie Logan (Heather Tom). The Bold and the Beautiful spoilers say more blasting will follow as the Logan ladies take Shauna aside. They’ll explode over Shauna’s role in keeping Hope and Beth Spencer (River Davidson and Madeline Valdez) apart and her decision to defend lying Flo now.

Meanwhile, Hope will continue to unleash her wrath. B&B fans can expect an angry meltdown on Hope’s end. Flo’s tears won’t move Hope and neither will any excuses she offers. It’s clear that Hope will be fed up with Flo’s rotten behavior. The Bold and the Beautiful spoilers say Hope will demand justice, so she’ll definitely support Ridge’s push for that next week.

It sounds like some exciting scenes are on the way. We’ll give you updates as other B&B news comes in. Stay tuned to the CBS soap and don’t forget to check CDL often for the latest Bold and the Beautiful spoilers, updates and news.