BY hellodrdavis on August 23, 2019 | Comments: 2 comments
Related : Soap Opera, Spoiler, Television, The Bold and the Beautiful 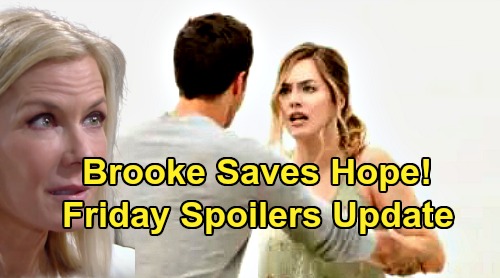 The Bold and the Beautiful spoilers update for Friday, August 23, tease that Hope Logan (Annika Noelle) will find herself in a dangerous situation. As B&B viewers know, she plans to go over to Steffy Forrester’s (Jacqueline MacInnes Wood) house to pick up some of Beth Spencer’s (River Davidson and Madeline Valdez) things, and while she’s there, she’ll wind up under threat by an angry and unstable Thomas Forrester (Matthew Atkinson).

As B&B viewers witnessed, Thomas is getting completely out of control. Hearing from Hope about the annulment really pushed him over the edge, and he lost it when he was confronting his young son Douglas Forrester (Henry Joseph Samiri) about his “betrayal” for telling the secret about Beth. Thomas was abusive toward Douglas, demonstrating just how off-the-rails he’s become.

So there should be no doubt in anyone’s mind that Thomas is dangerous and poses a deadly threat to Hope. How he’ll track her down at Steffy’s house remains to be seen – perhaps Douglas or Amelia (Nicola Posener) will let it slip where Hope is headed. Nevertheless, Thomas will head there with a dangerous mindset. Thomas has been saying things like “until death do us part,” which doesn’t bode well for what he might be planning for Hope.

At any rate, Hope will be startled to encounter Thomas at Steffy’s house, and an altercation will ensue. It appears that Thomas will first encounter Hope inside the house, where they’ll argue. Eventually, they’ll make their way outside, perhaps as Hope is trying desperately to get away from Thomas.

While all of this is unfolding, B&B spoilers indicate that Ridge Forrester (Thorsten Kaye) and Brooke Forrester (Katherine Kelly Lang) will each get tipped off about Thomas’ plan to track Hope down at Steffy’s house. It’s possible that Douglas may let one of them know about his frightening visit with Thomas earlier, and that may lead to a conversation where Douglas reveals where his dad is headed.

However it happens, it seems that Ridge and Brooke will each race to get to Hope and save her from whatever Thomas may have planned. But B&B spoilers indicate that Brooke will get there first, and that something terrible is going to go down. Thomas and Hope will be arguing outside, when it seems that Brooke will come upon the scene and a terrible accident will occur.

Ongoing B&B spoilers say that Thomas will be the one who winds up seriously injured, and that it will be Brooke’s actions that get him to that state. It also appears that it will be unclear whether the whole thing will indeed be an accident or an intentional act on Brooke’s part, so that must mean that Ridge will arrive on the scene after the incident occurs.

At any rate, it’s going to be an explosive B&B episode on Friday, as Thomas is finally confronted and stopped. And since it will be Brooke who ultimately stops Thomas, viewers can expect some serious tension between Brooke & Ridge going forward as Thomas’ life hangs in the balance.