BY Heather Hughes on August 30, 2019 | Comments: one comment
Related : Soap Opera, Spoiler, Television, The Bold and the Beautiful 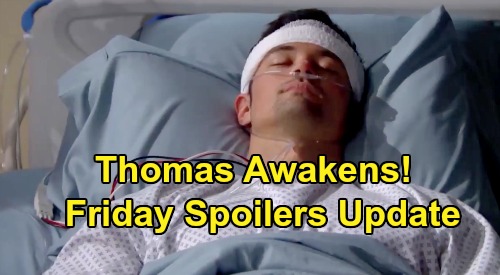 The Bold and the Beautiful (B&B) spoilers update for Friday, August 30, tease that Detective Alex Sanchez (Jeremy Ray Valdez) will try to get the true story of what happened at the cliff house. Naturally, that’ll be easier said than done! Everyone’s got a different opinion about how Thomas Forrester’s (Matthew Atkinson) fall actually went down.

Brooke Forrester (Katherine Kelly Lang) really thought Thomas posed a threat when she stumbled across that shocking scene. Hope Logan (Annika Noelle) insisted that wasn’t the case, but Brooke had no reason to think that was an innocent conversation. It looked terrifying from her perspective, so she stepped up to do what she felt was necessary.

Of course, the shove was never meant to hurl Thomas off the cliff. That was a tragic accident, but the fact remains that Brooke indeed delivered the push. Ridge Forrester (Thorsten Kaye) blames Brooke and knows what he saw, so he’ll have a rough time as he faces Detective Sanchez’s questions. The same goes for Brooke, who’s technically responsible but had good reasons for doing what she did.

The Bold and the Beautiful spoilers say Brooke and Ridge will struggle to answer, but Detective Sanchez will be relentless. He’ll undoubtedly manage to cobble together a story one way or another, but it probably won’t paint Brooke in the best light. Unfortunately, it doesn’t seem like Thomas’ version of events will help matters.

First thing’s first though. We have to get Thomas awake and alert. He’ll still be unconscious in Friday’s B&B episode, so several families will await word on his fate. The Forresters, Logans and Spencers will wonder if Thomas’ injuries may be too severe for him to overcome.

That was quite a fall, so they’ll grow increasingly fearful as the moments drag on. However, they’ll hold out hope for the sake of those closest to Thomas – especially poor Douglas Forrester (Henry Joseph Samiri). It would devastate the kid if he lost his father just months after losing his mother, Caroline Spencer (Linsey Godfrey).

Thankfully, The Bold and the Beautiful spoilers say Thomas will open his eyes and rejoin the action. That may be part of the Friday cliffhanger, but the real drama will come when he gets grilled by Detective Sanchez next week! We’ll give you updates as other B&B news comes in. Stay tuned to the CBS soap and don’t forget to check CDL often for the latest Bold and the Beautiful spoilers, updates and news.