BY hellodrdavis on December 19, 2019 | Comments: one comment
Related : Soap Opera, Spoiler, Television, The Bold and the Beautiful 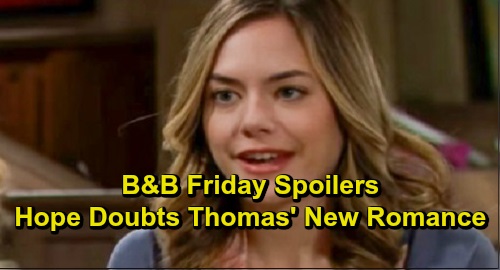 The Bold and the Beautiful spoilers for Friday, December 20, tease that Hope Logan (Annika Noelle) will have the feeling that something just isn’t right. As B&B viewers know, Zoe Buckingham (Kiara Barnes) has just made a big return into Hope’s life. Of course, Zoe is someone whom Hope never wanted to see again, since she kept critical information from Hope about her daughter Beth Spencer (River Davidson and Madeline Valdez) for months.

But now, after begging Steffy Forrester (Jacqueline MacInnes Wood) to not rehire Zoe, Steffy did so, but not for the reasons that Hope thinks. Hope’s been led to believe that Steffy is truly offering Zoe forgiveness and a fresh start, but B&B viewers know that Steffy agreed to the rehire so that Zoe could spy on Thomas Forrester (Matthew Atkinson).

Specifically, Liam Spencer (Scott Clifton) asked Steffy to rehire Zoe after getting Zoe on board to become Thomas’ confidante and hopefully get the dirt on what Thomas is really up to with Hope. Liam believes that Thomas is still obsessed with Hope, and that he has some plan to wind her back, while Steffy is hoping that the whole plan reveals that Thomas is truly in the process of reforming.

Well, it seems that Hope will have a gut feeling that something’s awry here. It looks like she’ll key in on Thomas’ sudden romantic feelings for Zoe and wonder if that’s really genuine. Of course, B&B viewers know that it’s all a ploy on Thomas’ part to get Hope to think he’s no longer obsessed so they can work on the fashion showdown together. And it seems that on some level Hope will know that something’s up, but she won’t know what.

The Bold and the Beautiful spoilers say that Hope will have some more questions about Thomas’ feelings for Zoe on Friday’s episode. She may want to know exactly when they got together and why she hasn’t heard anything about Zoe until now. But Thomas will probably have good answers for all of her questions, in typical Thomas style.

It also appears that Hope will be feeling the pressure to allow Thomas to design for her line for the fashion showdown. As B&B viewers know, both Ridge Forrester (Thorsten Kaye) and Eric Forrester (John McCook) have opined that Hope desperately needs a designer and that Thomas is ready and available to help. It seems that if Hope wants to participate in the fashion showdown, then she’s going to have to go with Thomas.

Well, it appears that Hope will need to run all of this by Liam before she agrees to Thomas being the designer for Hope For The Future. B&B spoilers say that Liam will reluctantly agree to Hope working with Thomas on her line on Friday’s episode. But what Hope won’t know is that Liam’s got a plan of his own with Zoe and Steffy.

It seems that while Liam won’t like the idea of Hope working with Thomas, he’ll feel like he can live with it since Steffy has hired Zoe at Forrester Creations and she’s on board spying on Thomas. Liam will probably feel that he can exert at least some control over the situation since he’ll have an inside line on what Thomas is thinking and dong along the way.

We’ll see how this all works out. Liam’s plan seems solid on paper, but he’s not really taking into account how Zoe’s feelings may factor into everything. Zoe really seems to care for Thomas, and she wants her relationship with him to work. Right now, she seems like kind of a wild card in the scenario, and one wonders whether she’ll really cross Thomas for Steffy and Liam in the end.