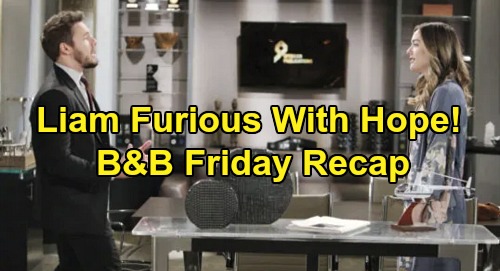 The Bold and the Beautiful spoilers recap for Friday, December 6, tease that Liam Spencer (Scott Clifton) and Steffy Forrester (Jacqueline MacInnes Wood) continued their conversation at Spencer Publications about Thomas Forrester (Matthew Atkinson). Liam told Steffy that Hope Logan (Annika Noelle) wanted nothing to do with Thomas, and that Douglas Forrester (Henry Joseph Samiri) was the only connection that Hope and Thomas would ever have.

Steffy pointed out that Douglas is a package deal, and that Hope would have to deal with Thomas going forward, which Liam stressed about. Liam stated that he loved having Douglas around and as part of his family with Hope, but that he wasn’t keen on having Thomas as a part of his life, too. Steffy worried that Liam was stressing about all of this and stated that she didn’t think that Hope would let anything come between them.

Meanwhile, at Forrester Creations, Hope told Thomas that his design samples were beautiful, and Thomas stated that he wanted her to come back and revive the Hope For The Future line. He pointed out that Forrester has a great daycare and that they could get a nursery for her on the executive floor. Hope appreciated all the enthusiasm and said that it sounded very exciting, prompting Douglas to ask if Hope was saying yes.

Hope then said that she needed to think about it, and Thomas said that he wasn’t going to pressure her, but that they’d make a great team. Douglas chimed in that “you do make a great team – you’re my Mommy and Daddy.” Hope looked hesitant but thoughtful as she clearly contemplated coming back and revitalizing her line. She then left and headed to Spencer Publications.

Next, Steffy arrived at Forrester Creations and encountered Thomas and Douglas alone in the CEO office. She immediately noticed Douglas’ Hope For The Future drawing and turned to Thomas to find out what was going on. Douglas then announced that “Daddy asked Mommy to come back to work with him,” which exasperated Steffy.

Pam Douglas (Alley Mills) came in and took Douglas to get yogurt, and Steffy pounced on Thomas for coaxing Douglas to make the drawing for Hope. She accused Thomas of using Douglas to lure Hope back to Forrester Creations. Thomas denied it, which prompted Steffy to demand that Thomas tell her what he’s up to.

Meanwhile, Hope arrived at Spencer Publications to see Liam. They talked for a bit about how Liam was getting along with Bill Spencer (Don Diamont), then talk turned to Hope and how she loved being home with Beth Spencer (River Davidson and Madeline Valdez), but that eventually she wanted to go back to work. She told Liam that she was thinking about going back and that she thinks she’s ready.

Liam then offered Hope his full support and asked how long it was going to take to get a new designer. Hope then hesitated and said that this was the part she was unsure about, which immediately prompted Liam to realize that she was thinking about keeping Thomas on the line.

Next, Ridge Forrester (Thorsten Kaye) talked with Shauna Fulton (Denise Richards) at the Forrester mansion. He had just received divorce papers from Carter Walton (Lawrence Saint-Victor) and was contemplating his next move. He told Shauna that he needed to try one more time with Brooke Forrester (Katherine Kelly Lang), which made Shauna sad. Nevertheless, Shauna supported Ridge’s effort and told him to just be honest with Brooke.

After Ridge left, Quinn Forrester (Rena Sofer) came in the room to find Shauna upset. Shauna lamented that Ridge just left with divorce papers for Brooke, but that she still didn’t think that she had a future with Ridge since he was hoping that he and Brooke wouldn’t sign the papers. Shauna said that for a minute there, it seemed like she and Ridge had real potential.

Finally, Ridge arrived at Brooke’s place carrying the divorce papers. Ridge then said that he missed his “Logan” and that this wasn’t want he wanted. He stated that they were meant to be together, and that she was the love of his life, yet the distance between them keeps growing. He said that he didn’t think it was too late and that they could figure this out as Brooke just stood there in silence.

Ridge then went on to say that forgiveness was the only answer, and Brooke chimed in about Shauna living in the guest house, but Ridge said he didn’t want to talk about Shauna. He said that there’s only one thing keeping them apart, and that is their disagreement about Thomas, but that a little forgiveness could go a long way.

Brooke then said, “So I forgive Thomas or we get a divorce? You don’t understand what you are asking.” Exasperated, Ridge said that he was trying to put this family back together, and that it would take work and effort together, and that he wants Brooke by his side. He ended his plea with: “Can you find it in your heart to help me help my son? Can you forgive Thomas, please?” And Brooke simply stared at him defiantly.