The Bold and the Beautiful Spoilers: Friday, January 11 – Reese Shows Taylor How Much He Cares – Brooke Sets Bill Straight

BY hellodrdavis on January 10, 2019 | Comments: one comment
Related : Soap Opera, Spoiler, Television, The Bold and the Beautiful 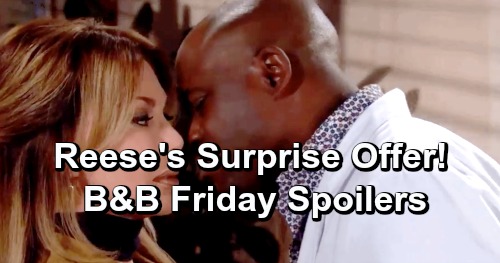 The Bold and the Beautiful spoilers for Friday, January 11, tease that Reese Buckingham (Wayne Brady) will feel comforted and supported by Taylor Hayes (Hunter Tylo). Reese is feeling just awful over the “death” of Beth Spencer, and he’s deeply worried about the thug who is breathing down his neck. Taylor has been kind enough to offer her support and friendship, and Reese is deeply grateful.

Of course, Taylor doesn’t know the whole story about what happened with Hope Spencer’s (Annika Noelle) delivery. It’s certainly looking like Reese led Hope and Liam Spencer (Scott Clifton) to believe their baby died when she really survived. It’s no wonder that Reese is feeling terrible about Hope and Liam’s pain, and Taylor has no idea what really transpired.

Still, Reese will be touched by Taylor’s sport, and he’ll find himself developing feelings for her. B&B spoilers say that he’ll want to demonstrate for Taylor just how much he cares for her. Exactly what that will involve remains to be seen, but chances are it will involve a lead on a baby that Steffy Forrester (Jacqueline MacInnes Wood) might be able to adopt.

Reese knows that Steffy is considering adopting a sibling for her daughter Kelly Spencer (Zoe Pennington), and he remembers that Taylor would do just about anything to help Steffy’s adoption dream come true. Will Reese broach the topic of a possible adoption connection with Taylor? And will the baby in question actually be Beth?

Meanwhile, on the new B&B episode on Friday, January 11, Brooke Forrester (Katherine Kelly Lang) will spend some time with both Ridge Forrester (Thorsten Kaye) and Bill Spencer (Don Diamont). Ridge and Bill seem to have buried the hatchet for the time being and have come together in unity in light of the tragedy with Beth.

On Friday’s episode, Ridge and Bill will discuss their rocky history in the presence of Brooke. They’ve been at each other’s throats a lot in the past year, with Ridge’s judge tampering fiasco, and with Bill’s relentless pursuit of Brooke. Brooke will weigh in on the difficulties, and she’ll make it clear exactly where her allegiance lies.

Brooke will likely let Bill know in no uncertain terms that she’s happily married to Ridge, and that she has no intention of making any changes to her status. She might even address the kisses she shared with Bill, and how no secret meetings or future kisses are going to occur going forward. We’ll see how Bill responds to that.