BY hellodrdavis on July 18, 2019 | Comments: one comment
Related : Soap Opera, Spoiler, Television, The Bold and the Beautiful 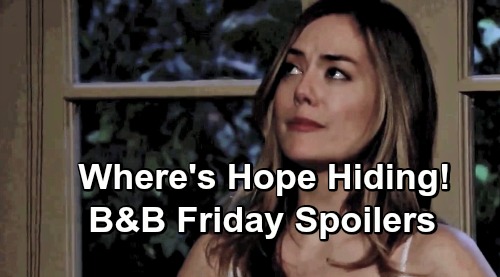 The Bold and the Beautiful spoilers for Friday, July 19, tease that Brooke Forrester (Katherine Kelly Lang) will realize that the time is now to convince Hope Logan (Annika Noelle) to call off her wedding to Thomas Forrester (Matthew Atkinson). As B&B viewers know, Brooke is trying desperately to convince her daughter that marrying Thomas is a terrible mistake.

It looks like that effort will continue on Friday’s episode, as Hope hems and haws about getting ready for her walk down the aisle. Everyone is downstairs waiting for Hope to make her big entrance, and no one is feeling more impatient than Thomas.

For Thomas, feelings of helplessness will probably set in. He’s used to having every opportunity to manipulate Hope and use Douglas Forrester (Henry Joseph Samiri) to get her to comply with his wishes, but for now all he’ll be able to do is pace and wonder whether Hope is really going to come down those stairs and go through with the ceremony.

And of course Liam Spencer (Scott Clifton) will be waiting and wondering as well. Liam knows that Hope doesn’t really love Thomas, and that she’s only going through with this wedding for Douglas’ sake. He’s hoping that his ex-wife will come to her senses and call the whole thing off, and he plans to be right there for her if she does.

It looks like the bickering between Liam and Thomas will continue on Friday’s episode, as the two men wonder exactly what’s delaying the wedding. Look for them to get into another spat during the down time and engage in a war of words while they wait for the ceremony to begin.

Meanwhile, on the new episode of B&B on Friday, July 19, more wedding guests will arrive on the scene. Zoe Buckingham (Kiara Barnes) will show up, along with Florence “Flo” Fulton (Katrina Bowden) and Wyatt Spencer (Darin Brooks). Of course, for Wyatt this will be just another wedding, but for Flo and Zoe, anxiety levels will run high.

Both Flo and Zoe know that Thomas is no good for Hope, and that he’s keeping a big secret from her. As B&B viewers know, Thomas found out several weeks ago that Hope and Liam’s daughter Beth Spencer is alive and was adopted by his sister Steffy Forrester (Jacqueline MacInnes Wood).

But Thomas doesn’t want Hope to ever find out the truth about Beth, as that would surely make her and Liam get back together to raise their daughter. Thomas can’t have that, so he’s strong-arming Flo and Zoe into keeping the secret as well.

Of course, this is all horrifying for Zoe, but for Flo the stress of the situation will be absolutely unbearable, since she’s also Hope’s cousin. Plus, there’s also the fact that she’s pretending to be Phoebe Forrester’s (River Davidson and Madeline Valdez) birth mother when she knows good and well that Phoebe is Beth.

According to B&B spoilers, Flo will start to feel the weight of all of the secrets that she’s keeping, and she’ll turn to alcohol to cope. It looks like she’ll start hitting the champagne before the wedding starts, and since there will be a delay in the wedding going down, that will leave her plenty of time for her to booze it up.

Then, in her drunken state, she’ll corner Zoe and announce that it’s not too late to stop Thomas from marrying Hope and that they should tell the truth about Beth. This will cause Zoe to lose it, and she’ll try to do whatever she can to stop Flo from divulging all of their carefully-kept secrets.

Of course, ongoing B&B spoilers indicate that this wedding is going to happen eventually, so it looks like Zoe will manage to get a lid on Flo and deal with the situation. Thomas will be involved as well in containing Flo, and it will lead to some tense moments, but ultimately we’ll end up seeing a wedding.