BY hellodrdavis on June 13, 2019 | Comments: one comment
Related : Soap Opera, Spoiler, Television, The Bold and the Beautiful 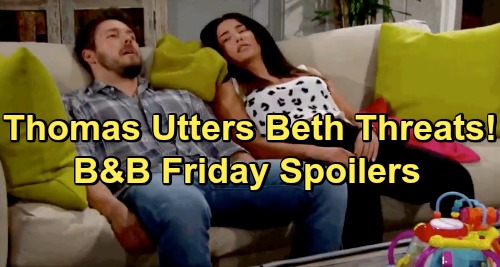 The Bold and the Beautiful spoilers for Friday, June 14, tease that Thomas Forrester (Matthew Atkinson) will start making threats. He’s just decided in the passion of the moment to keep the secret about Beth Spencer from Steffy Forrester (Jaqueline MacInnes Wood), Hope Logan (Annika Noelle), and Liam Spencer (Scott Clifton). But that leaves him with a big problem.

Thomas knows that he’s got some loose ends to tie up in the form of Florence “Flo” Fulton (Katrina Bowden), Zoe Buckingham (Kiara Barnes), and Xander Avant (Adain Bradley). It’s not going to be easy for four people to keep the baby secret under wraps, so Thomas will have to resort to strong-arming everyone to make them keep the secret.

The Bold and the Beautiful spoilers say that Flo, Zoe, and Xander will be shocked to learn that Thomas chose not to divulge the secret, and they’ll probably demand to know why, but Thomas isn’t going to be playing that game. Instead, B&B spoilers indicate that he’ll take control and become ringleader of the secret-keeper gang, insisting that nobody will tell another soul about Beth.

Now, this will probably be a welcome development for Zoe, who will agree with Thomas and be perfectly happy to comply with his demand. But Flo and Xander will be a different story, and they may require some more threats to get them to comply. Flo will probably cave to Thomas’ threats, but Xander won’t want to comply, and Thomas may have to threaten his very well-being to get him to cooperate with his master plan.

We’ll see exactly how Thomas bullies everyone into keeping the secret, but it looks like he’ll have a plan and that it will work for the foreseeable future. This baby swap storyline isn’t going to come to a conclusion for a while, so expect to see Thomas orchestrate the situation and keep everyone quiet for the time being.

Meanwhile, on the new episode of B&B on Friday, June 14, Ridge Forrester (Thorsten Kaye) will grow increasingly concerned about the state of his marriage. The situation with Steffy, Liam, Hope, and Thomas is causing strain in Ridge’s relationship with Brooke Forrester (Katherine Kelly Lang), as they both want different things for their children.

And Brooke doesn’t appreciate Thomas’ interference in Hope and Liam’s marriage. It irks Brooke that Thomas thinks that Hope can just suddenly become a mother to Douglas Forrester (Henry Joseph Samiri) and forget all about Beth. And that’s bound to cause problems for “Bridge,” given that Thomas is Ridge’s son.

It’s all a recipe for disaster for Bridge, and it seems that the more they talk about it the worse things will become. Of course, they vowed to stay out of their children’s love lives a while back, but that’s easier said than done when such big changes are happening in their children’s lives.