The Bold and the Beautiful Spoilers: Friday, March 29 – Brooke Discovers Taylor’s Plot To Break Up Liam and Hope

BY hellodrdavis on March 28, 2019 | Comments: one comment
Related : Soap Opera, Spoiler, Television, The Bold and the Beautiful 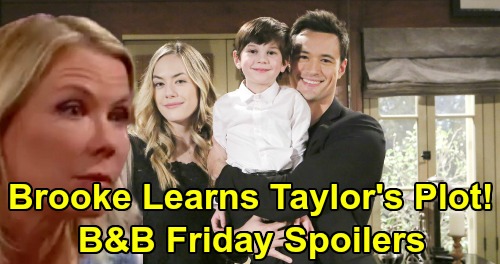 The Bold and the Beautiful spoilers for Friday, March 29, tease that Bill Spencer (Don Diamont) and Katie Logan (Heather Tom) will get a big surprise. These two have been enjoying their time together that’s been set up by their secret matchmaker, and now it looks like the matchmaker will strike again. This time, they’ll be treated to a romantic dinner.

According to B&B spoilers, here’s how it will go down. Katie will stop by Bill’s office after a long day, and they’ll be treated to a surprise dinner for two. But it won’t be just any dinner. The meal will be prepared by none other than the famous Chef Chambre, who will be portrayed by reality TV star Tamar Braxton. It should be a special evening for “Batie,” as they enjoy a little romance and a fine dining experience.

Of course, all this begs the question of who exactly is Bill and Katie’s secret matchmaker. At first, it was looking like Justin Barber (Aaron D. Spears) and Donna Logan (Jennifer Gareis) may be the brains behind the scenes, but they’ve been making comments recently that suggest it’s not them.

So, could it be Wyatt Spencer (Darin Brooks) and Sally Spectra (Courtney Hope) who are working to play cupid? It’s always possible, but those two have been wrapped up lately in Sally’s drama in choosing between working for Spencer Publications and Forrester Creations. The Bold and the Beautiful buzz suggests that it could be Will Spencer (Finnegan George) who is playing matchmaker for his parents, which would be a cute option.

We’ll see if any clues emerge during Bill and Katie’s romantic dinner that indicate who might be behind the matchmaking effort. They may try to get the information out of Chef Chambre, but it looks like she’ll remain mum and the identity of their cupid will remain a mystery.

And of course, Taylor’s got an ulterior motive in wanting Hope and Douglas to bond. She’s hoping that Hope will get fixated on Douglas and Thomas Forrester (Matthew Atkinson) and eventually leave Liam Spencer (Scott Clifton), paving the way for Steffy Forrester (Jacqueline MacInnes Wood) to reunite with Liam.

The Bold and the Beautiful spoilers say that Brooke will be livid when she learns about Taylor’s wish for Hope, and she’ll likely vow to fight back and support Hope and Liam’s marriage.

Of course, all of this will only fan the flames that are currently raging between Brooke and Taylor. They aren’t in a good place right now, and it seems that TPTB are trying hard to set up a major Brooke-Taylor war and keep the Steffy-Hope conflict going in Steffy’s absence. We’ll see where it all eventually leads, but B&B spoilers do indicate that Hope and Thomas will find comfort in each other in the short-term, so Taylor just might get her wish.