BY hellodrdavis on March 7, 2019 | Comments: one comment
Related : Soap Opera, Spoiler, Television, The Bold and the Beautiful 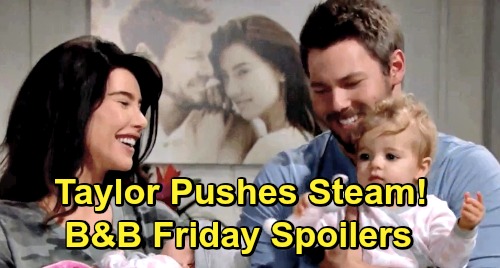 The Bold and the Beautiful spoilers for Friday, March 8, tease that Florence “Flo” Fulton (Katrina Bowden) will be overcome with emotion and guilt as she sits facing Hope Spencer (Annika Noelle) and Liam Spencer (Scott Clifton) at Wyatt Spencer’s (Darin Brooks) dinner party. Flo has just begged Hope and Liam not to hate her, and she’s about to spill the beans about who Phoebe Forrester (Isabella de Armas and Redford Prindiville) really is.

But it doesn’t look like Flo will end up divulging the details just yet, so it looks like something or someone will stop her from giving up the truth. She may suddenly remember just what’s at stake if she tells the truth – she and Reese Buckingham (Wayne Brady) would be in loads of trouble and would likely go to jail.

But her odd behavior at the party will likely cause some suspicion, probably from Liam and Wyatt. Liam was already suspicious when Hope initially told him that she met Phoebe’s birth mom, and now that he’s met Flo he may be worried that she’ll try to insinuate herself into Steffy Forrester (Jacqueline MacInnes Wood) and Phoebe’s life. If Liam shares his suspicions with Wyatt, then the two may decide to do some digging into Flo’s life.

Meanwhile, on the new episode of B&B on Friday, March 8, Steffy and Taylor Hayes (Hunter Tylo) will continue their discussion at Steffy’s house. Taylor is just so happy for her daughter and her accomplishments as a mom of two beautiful girls. But she’ll also get some renewed hope for the state of Steffy’s love life when Steffy makes a big reveal to her mom.

Steffy will tell Taylor about how Hope tried to “give’ Liam back to her, and about how Hope feels that she’s keeping Liam from being a full-time father to Kelly Spencer (Chloe Teperman and Zoe Pennington) and Phoebe. Taylor will get excited by that news, since Taylor has wanted Steffy and Liam to be together all along.

Taylor will weigh in on the situation, and she’ll urge Steffy to fight for Liam and her family. She’ll probably argue that Hope is beginning to see the truth – that Steffy and Liam belong together, and that the children’s needs should take precedence. But Steffy will tell her mom that she doesn’t want a Steam reunion this way, and that it just wouldn’t be right.