BY Heather Hughes on May 10, 2019 | Comments: one comment
Related : Soap Opera, Spoiler, Television, The Bold and the Beautiful 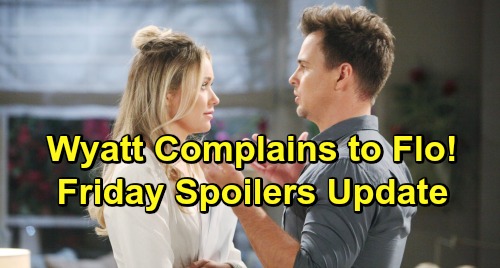 The Bold and the Beautiful (B&B) spoilers for Friday, May 10, tease that Quinn Forrester (Rena Sofer) will thoroughly enjoy Sally Spectra’s (Courtney Hope) misery. Wyatt Spencer (Darin Brooks) was appalled by Sally’s secret-keeping, but Quinn believes there’s a silver lining here. She’s fine with a little pain for Wyatt since it got Sally out of his life.

Quinn will take a moment to rub it in on Friday. She’ll make it clear that Wyatt is done with Sally and urge her to move on. Quinn will undoubtedly bring up Florence “Flo” Fulton (Katrina Bowden) and how she’s a far better match. She’ll contend that Wyatt will can have an honest relationship with someone he can count on. Quinn will just keep pushing and pushing until Sally finally blows her top.

Sally may resort to some name-calling and insults, but what about her status with Wyatt? Will she defend herself as a lingering option? Sally can’t be sure of what the future holds, but it’s not looking good right now. She hurt Wyatt with her deception, and it’ll be incredibly easy for him to lean on Flo. Sally drove Wyatt into his ex’s arms by keeping Thomas Forrester’s (Matthew Atkinson) big secret.

Of course, Flo is hiding the baby swap, so Sally’s actions won’t seem so bad down the road. There may still be a chance for “Wally” to make it work eventually. In the meantime, Liam Spencer (Scott Clifton) will seethe over Thomas’ arrogant claims. He just confronted his rival about his plan to win Hope Spencer (Annika Noelle) over, but Thomas will fire back with his own criticism.

The Bold and the Beautiful spoilers say Thomas will praise himself as the man Hope needs. He’ll insist Hope is meant to be with him, not a terrible husband like Liam. Thomas will drag their marriage through the mud and suggest that Hope can build a better life. He’ll think Liam needs to accept that “Lope” is over and “Thope” is just around the corner.

Naturally, Thomas’ smart mouth will leave Liam even more riled than before. He’ll once again defend his relationship with Hope and push Thomas to back off. They’re married, so Liam will think Thomas has to respect that.

However, B&B fans know Thomas never respects anything at all! Everything he wants is fair game in his world. The Bold and the Beautiful spoilers say Liam will only succeed in fueling Thomas’ plot, so “Lope’s” marriage could indeed be in jeopardy.

It sounds like some great scenes are on the way. We’ll give you updates as other B&B news comes in. Stick with the CBS soap and don’t forget to check CDL often for the latest Bold and the Beautiful spoilers, updates, and news.