The Bold and the Beautiful Spoilers: Friday, November 8 – Danger Lurks For Thomas & Hope At Forrester – Brooke & Ridge Battle It Out Again 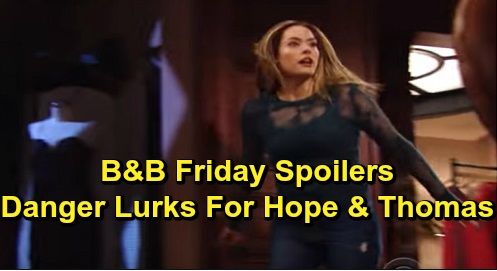 The Bold and the Beautiful spoilers for Friday, November 8, tease that Brooke Forrester (Katherine Kelly Lang) and Ridge Forrester (Thorsten Kaye) will find themselves in familiar territory. They’ll wind up in a huge fight over what Ridge suspects is going on between Hope Logan (Annika Noelle) and Thomas Forrester (Matthew Atkinson). As he recently told Shauna Fulton (Denise Richards), he’s worried that Hope is still seeking to become Douglas Forrester’s (Henry Joseph Samiri) adoptive mother.

Of course, Ridge doesn’t know the details about what’s really going on, and it’s worse than he suspects. He doesn’t know that Hope is trying to play on Thomas’ feelings for her and convince him that they might have a future together with Douglas, nor that her end game is to eventually take custody completely away from Thomas. But he suspects that something is going on, ever since he saw Hope being nice to Thomas at the Forrester Halloween party.

On Friday’s B&B episode, look for a major altercation between Brooke and Hope over the issue of Thomas and his custody of Douglas. It looks like Ridge might voice his suspicions to Brooke about her and Hope’s plan to take Douglas from Thomas. Of course, if he does, then Brooke probably won’t give up Hope’s actual plan, since she’s behind Hope 100%.

But it does appear that Brooke and Ridge will fiercely argue over Hope’s right to become a legal guardian of Douglas. Of course, Ridge doesn’t think that Hope’s got any business trying to legally adopt Douglas and it all seems totally unnecessary to him. He truly believes that Hope is overstepping her bounds, since Douglas has a father and an extended family to take care of him. But Brooke sees it differently, since she views Thomas as an unfit parent.

At any rate, B&B viewers can expect another explosive confrontation, and we’ll see if Brooke gives up the fact that Hope is at Forrester Creations with Thomas and Douglas trying to get the adoption papers signed. Chances are she won’t, since ongoing B&B spoilers indicate that she’ll continue to cover for Hope and keep her big plot against Thomas under warps from Ridge.

Meanwhile, on the new episode of B&B on Friday, November 8, Hope will wait anxiously as Thomas hesitates before signing the adoption papers. This is the moment she’s been waiting for, and she’ll be wondering whether Thomas is actually going to give her what she wants. According to B&B spoilers, Hope will ultimately become Douglas’ adoptive mother, so it certainly looks like Thomas is going to sign those papers.

But that is only part of what’s on Hope’s mind right now. She doesn’t know what Thomas has done with Douglas. As B&B viewers will remember, Thomas told Hope that Douglas had “other plans” and he took him somewhere, ostensibly somewhere else in the Forrester building. But is Douglas in someone else’s care, or could he be alone in the building somewhere?

These are crucial questions, since B&B viewers know that there’s a very dangerous situation currently in the Forrester building. There’s a huge vat of hydrochloric acid that Jack Maclaine (Todd McKee) and his team were using to clean some of the industrial washing machine elements. Charlie Webber (Dick Christie) promised to keep the area cordoned off and safe, but there’s definitely a reason why viewers have seen so much of the dangerous area.

B&B spoilers also say that on Friday’s episode the situation between Thomas and Hope will take an unexpected turn for the worse. Hope will embark on a frantic search of the Forrester building, presumably for Douglas, as she screams at Thomas for being a monster. Will Thomas have hidden Douglas from Hope? And will he turn on Hope, perhaps after he finds out that she was only being nice to him in order to get his signature on the adoption papers?

Exactly what will happen remains to be seen, but the whole scenario is going to culminate in a big event on Friday’s episode, as B&B spoilers indicate that someone will not survive. And given that ongoing B&B spoilers mention Hope and Douglas, it shouldn’t be either of them who perishes. But what about Thomas? B&B spoilers point to him being missing in subsequent episodes, so he could be the one who dies – but then again, this could be a B&B fake-out and Thomas could merely become missing and presumed dead.

We’ll see exactly what unfolds on Friday’s episode, but it’s certainly looking like there will be some dramatic and shocking moments for sure, so stay tuned! We’ll give you updates as B&B news comes in. Stick with the CBS soap and don’t forget to check CDL often for the latest Bold and the Beautiful spoilers, updates, and news.