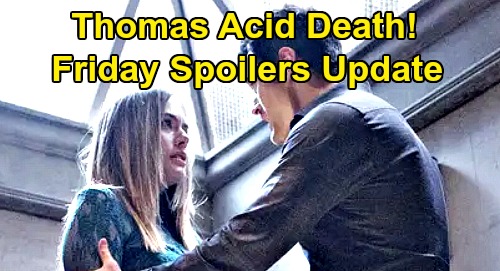 The Bold and the Beautiful (B&B) spoilers update for Friday, November 8, reveals Hope Logan (Annika Noelle) will await Thomas Forrester’s (Matthew Atkinson) signature. He’s decided to sign the adoption papers and grant Hope joint custody of Douglas Forrester (Henry Joseph Samiri), but Hope will grow concerned by his delay. As Thomas hesitates, Hope may have to do a little more convincing.

However, Hope will get her wish soon enough. The adoption papers will ultimately be signed, but what happens next will throw Hope for a loop. The Bold and the Beautiful spoilers say Thomas’ dark tendencies will be on display. He’ll creep Hope out and leave her anxious to make a break for it.

Thomas is bound to feel duped and betrayed by Hope’s latest move. He’ll feel like she’s cheating him out of his own benefits, but he probably won’t give up on winning her over. B&B spoilers say Thomas will chase after Hope, who’ll be frantically searching for Douglas. As Hope climbs up some stairs, she’ll turn toward Thomas and express confusion over how he turned into this monster.

The Bold and the Beautiful spoilers say Hope won’t understand how Thomas could be so cruel to Douglas. She’ll still want to know where the boy is, but Thomas will want to focus on them in this moment. They’ll have a serious showdown that isn’t going to end well for Thomas.

One character will face a deadly outcome in Friday’s episode. Hope and Douglas are perfectly fine next week according to B&B spoilers. That leaves Thomas to meet a gruesome end, but things may not be as they seem.

By the time Monday rolls around, Hope will fear the worst when she can’t find Thomas anywhere. It sounds like Thomas will fall, leaving Hope to assume he landed in that hydrochloric acid vat. Hope will likely believe Thomas is dead – and that lines up with the major character death that’s been teased for a while now.

Of course, a presumed death can be undone, and there’s a good chance that’s what B&B will do eventually. For now though, Hope will be a panicked mess! Over with Ridge Forrester (Thorsten Kaye), he’ll get into another fierce argument with Brooke Forrester (Katherine Kelly Lang). They’ll go to war over Hope’s push for legal guardianship and what she’s willing to do to make it happen.