The Bold and the Beautiful Spoilers: Friday, October 11 – Katie Wants To Meet Her Secret Donor – Who Will Spill The Truth?

BY hellodrdavis on October 10, 2019 | Comments: one comment
Related : Soap Opera, Spoiler, Television, The Bold and the Beautiful 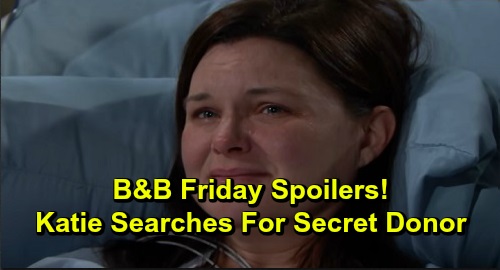 The Bold and the Beautiful spoilers for Friday, October 11, tease that the family of Katie Logan (Heather Tom) will anxiously wait as the kidney transplant surgery continues. Waiting on a loved one in surgery can be tough, especially when it’s a life-or-death matter as this is, and Bill Spencer (Don Diamont) will do his best to be patient, which is a pretty big challenge for the publishing mogul. As B&B viewers know, Katie got the kidney she needed in the nick of time, thanks to Flo Fulton (Katrina Bowden).

At the suggestion of her mother, Shauna Fulton (Denise Richards), Flo was tested as a potential match for Katie, and she was happy to find out that she was a compatible donor. Now both Katie and Flo are in surgery, while Katie’s family rallies in the waiting area. Of course, Shauna is currently waiting in another area of the hospital and she’s all alone because no one in Katie’s family knows that Flo is Katie’s anonymous kidney donor.

Well, on Friday’s episode of B&B, Bill and the rest of Katie’s family will get some fantastic news. They’ll get word that Katie has come through the surgery, and that she’s doing well. It certainly doesn’t appear that there will be any immediate concerns or complications from the surgery, and that will be a huge relief to everyone involved. Of course, Will Spencer (Finnegan George) is off keeping busy with Donna Logan (Jennifer Gareis), so he’ll probably get the news a bit later, but the rest of the family will rejoice and be quite relieved.

Of course, it will be a while before Katie will be able to see her family, but Will and Bill will surely be there waiting as Katie awakens from anesthesia. She wanted the first face she saw to be her son’s, and that should be a touching moment for everyone. But Katie will have something other than family on her mind, too – she’ll be thinking about her anonymous donor.

Katie will probably realize as she wakes up and senses the enormity of the situation that her donor has gone through a similar ordeal, yet for him or her, it was a choice and not a necessity. Chances are, that will profoundly affect Katie and get her thinking about the person who made such a sacrifice and gave her the gift of life. According to B&B spoilers, Katie will decide that having a secret donor won’t do, and she’ll want to meet her donor.

Of course, that will be a problem, since Flo doesn’t want her aunt or anyone else to know that she was Katie’s donor. Flo just wants to have done the right thing for the right reason – to save Katie’s life – and she doesn’t want to give anyone the perception that she donated her kidney just to make nice with the Logan family. After what Flo did to Hope Logan (Annika Noelle) by keeping the secret about Beth Spencer (River Davidson and Madeline Valdez), she feels that she wanted to do something good for the family.

Plus, Flo knows that it would probably cause unnecessary drama for the Logan, Spencer, and Forrester families if her identity were to become known. Unfortunately, though, it appears that something is going to happen, and Flo’s identity will be revealed to Katie and the rest of the family. How that all goes down remains to be seen – perhaps a member of the medical staff will let it slip, or even Shauna could “accidentally” see to it that the family knows that Flo’s the secret donor.

However it happens, B&B spoilers are clear that everyone will eventually find out Flo’s identity, and Flo surely won’t be thrilled about that. And ultimately, Katie, Bill, Brooke Forrester (Katherine Kelly Lang) and everyone else will have to reconcile the fact that one of the people they detest the most did something pretty amazing for them.