The Bold and the Beautiful Spoilers: Friday, October 18 Update – Steffy and Hope Spar Over Who’s the Bigger Victim, Claws Come Out 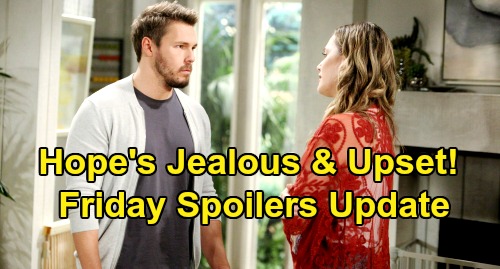 The Bold and the Beautiful (B&B) spoilers update for Friday, October 18, teases that Shauna Fulton (Denise Richards) will deliver some disturbing news. She’ll leave Ridge Forrester (Matthew Atkinson) troubled when she reveals that Thomas Forrester (Matthew Atkinson) also knows about their kiss. Ridge will definitely have some good reasons to worry since he’s got so much on the line.

B&B viewers know Ridge and Brooke Forrester’s (Katherine Kelly Lang) marriage isn’t on solid ground. They had already been fighting like crazy over Thomas, so the exposure of his night with Shauna didn’t help. Ridge hates the thought of Brooke finding out about that kiss, especially after claiming nothing happened. He’ll realize he needs to have a little chat with his son and make certain this secret’s locked up tight.

Thomas has a devious plan to rid the Forresters of the Logans, but he won’t let Ridge in the loop. Instead, he’ll suggest he’s got his dad’s back. Of course, The Bold and the Beautiful spoilers say Thomas will be anything but an ally in the coming weeks. He’d love to see “Bridge’s” marriage completely destroyed – and it looks like he’ll get his wish soon.

In the meantime, let’s talk about Steffy Forrester’s (Jacqueline MacInnes Wood) fragile heart. She went through a lot after she lost Beth Spencer (River Davidson and Madeline Valdez) and her chance with Liam Spencer (Scott Clifton). Steffy just brought up the beautiful family they could’ve had and wondered aloud if they could do this again. She knows there are no guarantees, but it’s worth asking if it’s possible.

However, Liam has made a firm commitment to Hope Logan (Annika Noelle) – at least as firm as a commitment gets for Liam! He has a reputation as a waffler, so he may drift back toward Steffy eventually. Today isn’t that day though, so Liam will have to break it to Steffy gently. He’ll make it clear that he’ll always care about Steffy, but a “Steam” reunion isn’t what he wants.

Later, Hope will confront Steffy about her conversation with Liam and the secret visit with Beth. The Bold and the Beautiful spoilers say the claws will come out in Friday’s episode. They’ll spar over who suffered more in all this baby swap chaos. Steffy will think she faced the worst of it since Hope got her happy ending. Hope walked away with Beth and Liam, so Steffy will think she’s the bigger victim here.

Hope will rant about her own pain and perhaps dive further back into their love triangle’s history. B&B fans can expect some explosive scenes, so don’t miss all the action. We’ll give you updates as other details emerge. Stay tuned to the CBS soap and don’t forget to check CDL often for the latest Bold and the Beautiful spoilers, updates and news.