BY Heather Hughes on October 25, 2019 | Comments: one comment
Related : Soap Opera, Spoiler, Television, The Bold and the Beautiful 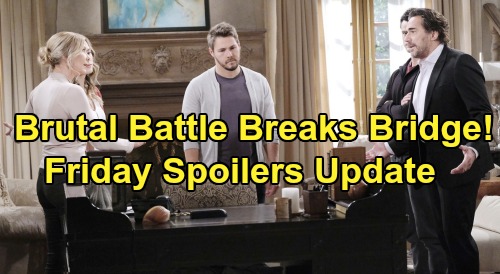 The Bold and the Beautiful (B&B) spoilers update for Friday, October 25, teases that tempers will flare as Ridge Forrester (Thorsten Kaye) puts his foot down with Brooke Forrester (Katherine Kelly Lang). He was revolted to learn his own wife had the adoption papers drawn up. Ridge gets why Brooke has concerns about Thomas Forrester (Matthew Atkinson), but he feels she took her grudge too far.

Hope Logan (Annika Noelle) will continue to back Brooke up, but Ridge won’t be persuaded by their fierce argument. The Bold and the Beautiful spoilers say Liam Spencer (Scott Clifton) will get stuck in the conflict. He may try to play peacemaker somewhat, but things will just be too heated. Ridge and the others have plenty to get off their chests, so this will be one explosive shouting match.

Ridge will reiterate that no one’s taking Douglas Forrester (Henry Joseph Samiri) from Thomas. He’ll feel like Thomas deserves to be with his son. Ridge will remain aghast that Brooke and Hope would do something like this, but they’ll refuse to admit they were wrong.

Hope and Brooke will believe Ridge is the one with the wool over his eyes. They’ll maintain that they’re just looking out for Douglas, but Ridge will think this is more about making Thomas pay. B&B fans can expect Brooke and Ridge’s marriage to take another hit. Their relationship will be hanging by a thread in Friday’s episode, so it’s clear that this will be a brutal fight.

Ridge will ultimately decide he should move in the Forrester mansion. He’ll want Thomas and Douglas there with him, so Brooke and Hope’s adoption plan will flop for now. Even so, Hope will do some strategizing and take another stab at this in the week ahead.

In the meantime, Thomas will get choked up during a sweet scene with Douglas. He’ll bend down next to the boy and make sure Douglas knows he’s loved. Thomas will apologize for not being a good enough dad, but he’ll assure Douglas he’s going to change. He’ll promise to be the father Douglas deserves, but that’s all talk at this point. Thomas has to prove he can treat his son right, so let’s hope he stays true to his word.