BY hellodrdavis on October 4, 2019 | Comments: one comment
Related : Soap Opera, Spoiler, Television, The Bold and the Beautiful 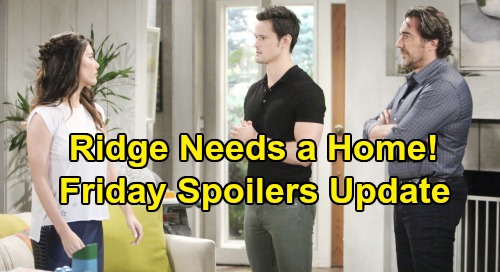 The Bold and the Beautiful spoilers update for Friday, October 4, tease that Katie Logan (Heather Tom) and Bill Spencer (Don Diamont) will spend some happy moments with their son, Will Spencer (Finnegan George). It looks like Bill will bring Will to the hospital to visit with his mother as she rests in between dialysis sessions. She’s been in the hospital since her collapse with total kidney failure and is anxiously awaiting a donor, but so far none of her family or friends have proven to be a match.

According to The Bold and the Beautiful spoilers, Katie will spend some nice moments with Will, who will wish his mom well and hope for a quick recovery. The visit will probably do Katie a lot of good, but she’ll probably put on a brave face for her little boy, as she won’t want him to see how terrified she actually is. In fact, for Katie, the time with her son will be poignant, as she realizes how much she has to live for, and what she’s going to miss if she were to not make it through this ordeal.

Katie will also get another visitor on Friday’s episode – her new kidney specialist, Dr. Davis (Tisha Campbell). Dr. Davis will probably evaluate Katie, and it looks like she’ll share the results of her analysis with Katie and Bill after Will leaves. It doesn’t appear that she’ll have the best news, since a donor hasn’t been found yet, and she’ll probably stress the urgency with which they need to find a kidney for Katie.

As a heart transplant recipient, Katie’s body is already in a compromised state, and it could be difficult for her to be on continual and sustained dialysis. Her body just might not be able to take it, highlighting the need for a compatible kidney donor asap. Ongoing B&B spoilers indicate that a donor will indeed be found, and it will be none other than Flo Fulton (Katrina Bowden), but for now things will look pretty dire.

Meanwhile, on the new episode of B&B on Friday, October 4, Ridge Forrester (Thorsten Kaye) will contemplate his new reality. Things got pretty heated between himself and Brooke Forrester (Katherine Kelly Lang), and the two have decided to separate for the time being. Ridge ended leaving the mansion to find new living arrangements.

Brooke took a hard line with Ridge and insisted that he couldn’t come back until he had papers in hand showing that Thomas Forrester (Matthew Atkinson) had relinquished custody of Douglas Forrester (Henry Joseph Samiri). Of course, that’s something that Ridge is almost certainly not going to do, so things don’t look good for “Bridge” right now.

The Bold and the Beautiful spoilers say that Ridge will make a change designed to repair the relationships with his children on Friday’s episode, but what will that entail? Obviously, Ridge will need new living quarters, and perhaps he’ll ask Thomas to live with him for the foreseeable future, as a means of helping his son and offering him the support he needs to become a stable father again.

And Ridge will reach out to Steffy Forrester (Jacqueline MacInnes Wood) with Thomas as well. She can’t be at all happy with her father right and brother now, given that Ridge signed off on the plea deal to let Flo go free and avoid prosecution for her role in the illegal adoption of Beth Spencer (River Davidson and Madeline Valdez) to Steffy. That relationship certainly needs repair, so perhaps Ridge will start there.