BY Heather Hughes on September 6, 2019 | Comments: one comment
Related : Soap Opera, Spoiler, Television, The Bold and the Beautiful 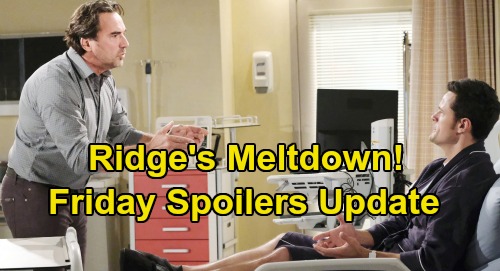 The Bold and the Beautiful (B&B) spoilers update for Friday, September 6, tease that Bill Spencer (Don Diamont) will focus on his plan for justice. He’s determined to make sure Thomas Forrester (Matthew Atkinson) pays the price for the suffering he’s caused. Dr. Reese Buckingham (Wayne Brady) and Florence “Flo” Fulton (Katrina Bowden) were the main team in the beginning, but Thomas became the ringleader in the end. His threats got nasty and led to the secret being kept even longer.

Of course, there was also the matter of Emma Barber’s (Nia Sioux) death. That’ll remain on Bill’s mind as he works toward Thomas’ takedown. The Bold and the Beautiful spoilers say Bill will seek proof of Thomas’ wrongdoing. He’ll be convinced he can find it if he tries hard enough. Bill will want some solid evidence, so he’ll dig around and hope that he can keep his menacing promise.

The GPS info may come back into play or there could be some other clue Bill stumbles across. He’ll do whatever it takes to sink Thomas, but Ridge Forrester (Thorsten Kaye) will fight just as hard to save his son. However, Thomas will have to get an earful first. After he recounts the story of the night Emma died, Ridge will hit the roof. He’ll be enraged by the events before and after Emma’s demise.

Thomas’ confrontation with Emma set up the car chase, which was a factor in Emma running off the road. She was also preoccupied with trying to contact Hope Logan (Annika Noelle), but Thomas’ pressure certainly didn’t help. He should’ve at least tried to assist Emma after the crash, but B&B fans know he didn’t do that either.

Ridge will wonder what in the world Thomas was thinking as he lashes out on Friday. He’ll remain livid despite Thomas’ excuses and attempts to explain. Even so, Ridge will have to calm himself and remember what’s at stake. He’ll be furious with his son, but he’ll want Thomas to avoid a prison sentence. Ridge won’t believe Thomas meant to kill Emma, so he won’t think he should pay for it.

The Bold and the Beautiful spoilers say this will set up a difficult deal next week. Ridge will have to make a choice that’s nearly unbearable, but he’ll do it for Thomas’ sake. It looks Flo will score freedom as a result, but Ridge will take comfort in protecting Thomas’ future.

Some gripping scenes are coming up, so don’t miss all the action. We’ll give you updates as other B&B news emerges. Stay tuned to the CBS soap and don’t forget to check CDL often for the latest Bold and the Beautiful spoilers, updates and news.