The Bold and the Beautiful Spoilers: Halloween Preview – Hope Crashes Party to Confront Thomas – Liam Dotes on Steffy and the Girls

BY Heather Hughes on October 17, 2019 | Comments: one comment
Related : Soap Opera, Spoiler, Television, The Bold and the Beautiful 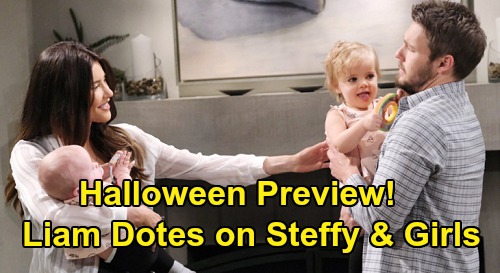 The Bold and the Beautiful (B&B) spoilers tease that things are about to get scary on the CBS soap. That’s because Halloween is coming up, and there are sure to be a few tricks in store! Some B&B characters will get treats instead, but there’ll definitely be some unpleasant surprises as the holiday hits.

First, we should mention that Ridge Forrester (Thorsten Kaye) will move in with Eric Forrester (John McCook) and Quinn Forrester (Rena Sofer). Since he’ll fear his marriage is beyond repair, Ridge will get settled at the mansion and plan to stay there for the foreseeable future. He’ll bring Thomas Forrester (Matthew Atkinson) and Douglas Forrester (Henry Joseph Samiri) along with him, which will set up some Halloween drama.

On Halloween night, Eric and Quinn will host a big bash. They’ll probably think it’ll be fun for Douglas and help feuding family members mend fences. Quinn and Eric will just want something to feel normal, so they’ll look forward to all the costumes and decorations.

Despite Objections, Hope Logan Will Crash The Halloween Party

Unfortunately, Hope Logan (Annika Noelle) will go against Liam Spencer’s (Scott Clifton) wishes and crash this party. Brooke Forrester (Katherine Kelly Lang) won’t think it’s a good idea either, but Hope’s mind will be made up. She’ll head over to the shindig in hopes of convincing Thomas to make a deal.

Hope would rather cut Thomas out of the picture entirely, but she’ll present the option of joint custody. The Bold and the Beautiful spoilers say it’s doubtful Thomas will agree to that.

He’ll be upset with Hope for previously trying to keep Douglas away from him. Thomas also has a plan to rid the Forresters of the Logans, so Hope’s plan won’t fit into his own. He’ll probably turn her down flat and send Hope on her way.

Liam Spencer And Steffy Forrester Will Bond As A Family

Other Bold and the Beautiful spoilers say Liam will arrive at the cliff house. He’ll take Beth Spencer (River Davidson and Madeline Valdez) over so she can be with Steffy Forrester (Jacqueline MacInnes Wood) and Kelly Spencer (Zoe Pennington) for Halloween. Of course, Liam will likely stick around. It should feel like old times as they bond as a family, so they could be heading into dangerous territory.

Regardless, this should be one eventful Halloween! Some great scenes are coming up, so don’t miss all the action. We’ll give you updates as other B&B news comes in. Stay tuned to the CBS soap and don’t forget to check CDL often for the latest Bold and the Beautiful spoilers, updates and news.