The Bold and the Beautiful Spoilers: Heartbreaking Death in 2020 – Which B&B Character Dies and Who’s to Blame?

BY Heather Hughes on December 27, 2019 | Comments: one comment
Related : Soap Opera, Spoiler, Television, The Bold and the Beautiful 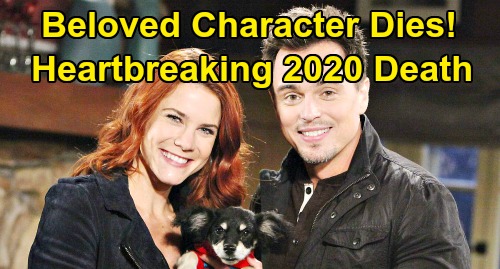 The Bold and the Beautiful (B&B) spoilers tease that 2020 is sure to be a big year for the CBS soap. B&B fans can expect several love triangles to heat up. Some couples will fall apart while others find new beginnings, but 2020 will be particularly unpleasant for one ill-fated character. That’s because a shocking death is on the way.

In the latest issue of Soap Opera Digest, B&B Head Writer and Executive Producer Bradley Bell confirmed the news. He insisted that a “beloved character” would meet his or her demise in 2020, but he refused to offer up any more details. Bell clearly doesn’t want to give too much away, so everyone’s free to speculate until the deadly drama gets closer.

With that in mind, let’s consider who might bite the dust. For starters, we can rule out all the show’s main players. There’s no chance of B&B killing off characters like Steffy Forrester (Jacqueline MacInnes Wood), Hope Logan (Annika Noelle), Liam Spencer (Darin Brooks), Brooke Forrester (Katherine Kelly Lang), Ridge Forrester (Thorsten Kaye), etc. Whether you think of those characters as beloved or not, they’re staples on this soap and aren’t going anywhere.

Although Thomas Forrester (Matthew Atkinson) has a dark side, new Bold and the Beautiful spoilers point to him turning things around in the new year. It’ll be a slow process, but the fact that it’s happening at all says Thomas will remain on the show. Of course, it also opens the door for the shocking death to be Thomas’ fault – either directly or indirectly. It could be what sparks this change.

Will someone die after a plot of Thomas’ spirals out of control? That’s one possibility to mull over. After all, Thomas chased after Emma Barber (Nia Sioux) and led to her running off the road, crashing her car and losing her life. Emma was also distracted over her texts to Hope, but Thomas was still a factor in that accident.

The Bold and the Beautiful spoilers point to Thomas eventually opening his heart to Zoe Buckingham (Kiara Barnes), but that doesn’t mean he’ll put Hope behind him completely. If there comes a time when Hope will consider being with Thomas, he’ll probably drop Zoe like a hot potato. If Zoe goes a bit crazy over something like that, it could cause some chaos and set up her potential death.

Would Zoe really be considered beloved? Probably not, but we all know how soap writers are! Bell obviously wants to play up this beloved angle for drama’s sake, but it may be a stretch in reality. Then again, there’s a chance this character will genuinely be beloved.

Would B&B dare to kill off someone like Pam Douglas (Alley Mills) or Charlie Webber (Dick Christie)? What about Donna Logan (Jennifer Gareis)? B&B might go for someone who would have an emotional impact without affecting the story too much. It would rile fans up if they killed off someone unnecessarily though, so they need to be careful here.

Our best prediction for who might be killed off is unfortunately Sally Spectra (Courtney Hope). We’d hate to see Sally meet a grim fate, but her preview info for the new year is awfully vague. Bell only promised a big story with lots of airtime for Sally, “Flo” Fulton (Katrina Bowden) and Wyatt Spencer (Darin Brooks). It sounds like something that could lead to Sally dying and Wyatt reconnecting with Flo in the aftermath. Sally could get caught in the Thomas crossfire and meet her maker.

There was also that ominous comment from Sally herself. She told Wyatt they’d be OK even if it killed her, so killing her off may indeed be what B&B has in store. Regardless, The Bold and the Beautiful spoilers say someone won’t make it out of 2020 alive! We’ll give you updates as other news comes in. Stay tuned to the CBS soap and don’t forget to check CDL often for the latest Bold and the Beautiful spoilers, updates and news.