The Bold and the Beautiful Spoilers: Hope and Thomas True Love Blooms – After Steffy and Liam Reunite? 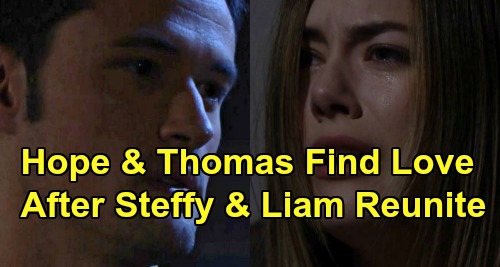 The Bold and the Beautiful (B&B) spoilers reveal that Hope Logan’s (Annika Noelle) recent declaration could be a hint about her romantic future. Just before Thomas Forrester (Matthew Atkinson) surprised Hope with his return from the “dead,” Hope was a mess looking at a pic of him on her phone. She gazed at Thomas and Douglas Forrester (Henry Joseph Samiri) together as she made what could be a telling statement.

A weepy Hope said, “I could never love you, but I didn’t want to hurt you.” On soaps, a character often says one thing and the opposite turns out to be true. Think about all those times when characters have insisted they would NEVER cheat, NEVER lie, NEVER forgive, etc. How many times did they in fact do those things? The truth is you can never say never on a daytime drama! We don’t buy that Hope could never love Thomas.

Thomas has certainly made some rotten moves and clearly needs professional help. Some B&B fans might find it hard to get past Thomas’ previous actions, but Hope did nearly kill the guy as far as she knew. This is a complex, messy situation. It’s the kind of thing B&B can fix, especially if they give Thomas an excuse for his behavior.

Over on Days of Our Lives, one of their most popular couples right now is Ben Weston (Robert Scott Wilson) and Ciara Brady (Victoria Konefal). Ben is a reformed serial killer who strangled multiple people, but Ciara would defend him to the bitter end. That’s because Ben had a chemical imbalance and was treated through medication as well as therapy. A devoted Ciara is currently fighting to prove Ben – who’s incarcerated and on death row – didn’t kill his own sister.

There’s no reason why Hope couldn’t fall in love with Thomas, particularly if he seeks help. That may be why B&B’s avoided having Thomas force himself on Hope in bed. That’s one less hurdle to conquer. After the way Hope rushed into Thomas’ arms and embraced him in relief, there’s certainly the possibility of a viable “Thope” pairing. Even if Thomas gets worse before he gets better, we certainly can’t rule out Hope and Thomas reuniting.

Liam Spencer (Scott Clifton) is obviously going to get back together with Steffy Forrester (Jacqueline MacInnes Wood). The writing’s on the wall. The Bold and the Beautiful surely won’t leave Hope without a love interest for too long. Wyatt Spencer (Darin Brooks) already has Sally Spectra (Courtney Hope) and Florence “Flo” Fulton (Katrina Bowden) to be torn over. Hope isn’t needed in Wyatt’s orbit.

That leaves Hope and Thomas. B&B might as well go for it since Noelle and Atkinson really do have fantastic chemistry. Do you think a true love story will ultimately develop for Thomas and Hope? Is that something you’d like to see if it was done right? Regardless, it seems likely that after “Steam” is back on, Hope will find herself falling for Thomas.