The Bold and the Beautiful Spoilers: Hope Begs Liam For Another Chance After Beth Reveal – But He’s Already Moved On With Steffy

BY hellodrdavis on July 17, 2019 | Comments: one comment
Related : Soap Opera, Spoiler, Television, The Bold and the Beautiful 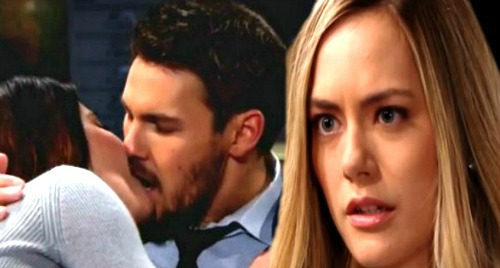 The Bold and the Beautiful spoilers tease that there’s an end in sight for the big reveal about Phoebe Forrester (River Davidson and Madeline Valdez) actually being Beth Spencer. Exactly how it’s all going to go down remains to be seen, but TPTB have promised an end to the storyline in the (hopefully) near future.

Hope has pushed her true love Liam Spencer (Scott Clifton) away and toward Steffy Forrester (Jacqueline MacInnes Wood) and the girls. She keeps saying that she wants Liam and Steffy to be together, but surely her tune will change once she finds out that her daughter is alive. What Hope craves the most is a family of her own, and she’s surely going to want her family with Liam back.

But will she be able to get that family back? After all, assuming that the marriage of Hope and Thomas takes place, which it certainly seems like it will, Hope’s going to be stuck in a marriage with him at that point. And she’ll have made a serious commitment to little Douglas that she won’t want to renege on.

But given that Liam is Hope’s one true love, and that Beth is the product of that love, she may try to break things off with Thomas and get Liam back. However, that may not even be possible. After all, it’s not like Liam will have been sitting around waiting for Hope – he will have moved on with Steffy and formed a meaningful family unit with her and Kelly Spencer (Chloe Tepermam and Zoe Pennington).

Liam may not be willing to just up and leave Kelly again, even for the chance at a family with Hope and Beth. After all, he did that once before, and look how that turned out – Hope ended up annulling their marriage and pushing him back toward Steffy. Plus, Liam may not feel the same way about Hope anymore – surely, he’ll always love her on some level, but he may think it’s a mistake to be in a relationship with her again.

And so Liam could very well decide to stay with Steffy and rebuff Hope’s request to get back together. Perhaps too much will have happened in the intervening time, and the love story of Hope and Liam won’t be able to be revived.

What do you think? Will the revelation of Beth’s existence make Hope want her family back with Liam? And will Liam have moved on with Steffy by then? Stay tuned to the CBS soap and don’t forget to check CDL often for the latest Bold and the Beautiful spoilers, updates, and news.