The Bold and the Beautiful Spoilers: Hope Breaks Down – Liam Seeks Professional Help To Save Marriage

BY hellodrdavis on February 23, 2019 | Comments: one comment
Related : Soap Opera, Spoiler, Television, The Bold and the Beautiful 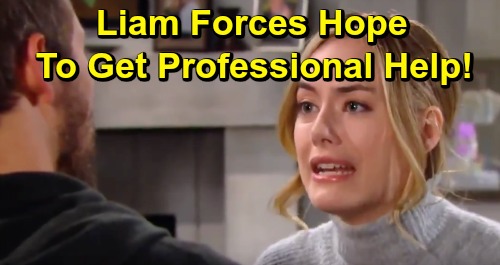 The Bold and the Beautiful spoilers tease that Liam Spencer (Scott Clifton) will be at his wit’s end where Hope Spencer (Annika Noelle) is concerned. He has been watching helplessly as Hope has descended into a deep depression as a result of Beth Spencer’s death. The tragedy has been hard on them both, but for Hope it has been especially difficult.

And to compound Hope’s problems with her grief, she had to come to terms with the fact that Steffy Forrester (Jacqueline MacInnes Wood) had adopted an infant that was the same age as Beth would be. Hope responded by outwardly supporting Steffy, but inside the development tore her up inside.

Hope can’t concentrate at work and she’s recently been overcome with irrational feelings of guilt over standing between Liam and his daughter Kelly Spencer (Chloe Teperman and Zoe Pennington). Her feelings are clouded by grief and depression, but she truly believes that she’s seeing things clearly for the first time, and that Steffy and Liam belong together with Kelly and Phoebe Forrester (Isabella de Armes).

This week, Hope will be so distraught by the feeling that she’s keeping a family apart that she’ll push Liam to leave her and go be with Steffy. She’ll gather Liam and Steffy together and forcefully return her wedding ring to Liam in a grand gesture. Of course, this won’t have the desired effect, as Liam will be having none of it.

Liam doesn’t want to leave Hope. He truly loves her, and he wants to help her through her grief. But how can he possibly help someone who is so distraught that she wants to end their marriage and push him to be with another woman?

One thing’s for sure. After Hope’s ring-returning move, both Liam and Steffy will be alarmed and deeply worried about Hope’s mental state. They may think that it’s time to get Hope some mental health support to deal with her grief and the feelings that she’s having about her marriage and about Liam’s family with Steffy.

Perhaps the only way for Liam to save his marriage at this point is to let mental health professionals take over Hope’s care for a while. It seems that the more Liam assures Hope that he loves her and wants to be with her, the more she pushes him away, so another approach may be needed.

Do you think it’s time for Hope to seek professional help for the problems she’s having? Stay tuned to the CBS soap and don’t forget to check CDL often for the latest Bold and the Beautiful spoilers, updates, and news.