The Bold and the Beautiful Spoilers: Hope Calls Cops on Flo and Shauna After Cabin Showdown – Raging Steffy Demands Justice?

BY Heather Hughes on August 1, 2019 | Comments: one comment
Related : Soap Opera, Spoiler, Television, The Bold and the Beautiful 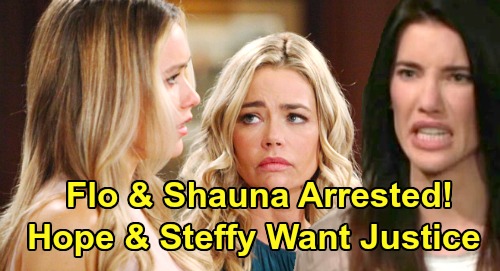 The Bold and the Beautiful (B&B) spoilers tease that Florence “Flo” Fulton (Katrina Bowden) will face loads of backlash for her role in the baby swap scheme. It wasn’t her idea, but she certainly went along with Reese Buckingham’s (Wayne Brady) cruel plan. Flo now regrets her actions and wants a chance to make things right, but that’s going to be a tough task.

Coming clean will be a nice start, but there are some things Flo just can’t undo. You can bet Flo will hear all about those when Hope Logan (Annika Noelle) rips into her on August 16. The Bold and the Beautiful spoilers say Flo and Shauna Fulton (Denise Richards) will sneak over to the cabin and try to talk to Hope. Perhaps they’ll have to be stealth about it since their fates may still be up in the air at that point.

Flo will naturally feel terrible about all the pain she’s caused for her cousin. However, she didn’t have a clue Hope was related to her when she signed on for this mess. Flo may use that as part of her defense, but that’s not going to fly with Hope. She may point out that it’d be horrible for Flo to do this to ANY mother. The fact that they happened to have a family connection only makes matters worse.

Even if Flo was in over her head in the beginning, she’s had months and months to make a confession. Flo stood by and let Hope grieve, get her marriage annulled and marry Thomas Forrester (Matthew Atkinson). She certainly had moments of intense guilt, but that wasn’t enough – and it doesn’t change how Hope suffered.

It doesn’t change the unbearable pain that’s brewing for Steffy Forrester (Jacqueline MacInnes Wood) either. The Bold and the Beautiful spoilers say Hope will explode at Flo, but Shauna won’t be spared. Brooke Logan (Katherine Kelly Lang), Katie Logan (Heather Tom), Donna Logan (Jennifer Gareis) will all take turns blasting Shauna for her silence. They might hear the commotion and join the outrage party.

How will this crazy showdown end? Will Hope or one of the other Logan ladies call the cops? After everything she’s been through, it’d be reasonable for Hope to want Flo and Shauna arrested. Detective Alex Sanchez (Jeremy Ray Valdez) should be on hand right around when these scenes air, so it’s possible they’ll be taken into custody.

If so, Steffy would undoubtedly have no problem with that! She’ll especially want Flo to pay for giving her a daughter that’s now being ripped away. The Bold and the Beautiful spoilers say both Hope and Steffy would have every right to demand justice!

Regardless, it’s clear that Flo and Shauna’s lives aren’t going to be just peachy from now on. Shauna’s consequences should be minor since she wasn’t as involved, but Flo was front and center in this plot the whole time. She deserves to have the book thrown at her.