The Bold and the Beautiful Spoilers: Hope Confesses She Wants Liam Back, But It’s Too Late – Only Steffy Makes Him Happy

BY Heather Hughes on June 29, 2019 | Comments: one comment
Related : Soap Opera, Spoiler, Television, The Bold and the Beautiful 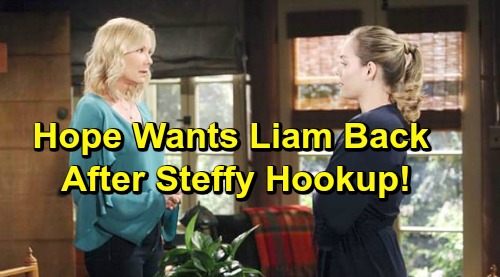 The Bold and the Beautiful (B&B) spoilers tease that Hope Logan (Annika Noelle) will face some regrets. After Liam Spencer (Scott Clifton) loses interest in Hope and her problems, he’ll put the spotlight on Steffy Forrester (Jacqueline MacInnes Wood). Due to the drugs in his system, Liam will spend the rest of the party making Steffy the center of his universe.

Thomas Forrester (Matthew Atkinson) will urge Hope to accept that Liam and Steffy are meant to be together. He’ll point to Liam’s behavior as proof of his love for Steffy. Thomas will hope to end “Lope’s” bond once and for all. The Bold and the Beautiful spoilers say Hope will be distraught, but she’ll also think this is for the best.

During the week of July 1-5, Hope will wrap her head around some complex feelings. She’ll decide to turn to her mom for comfort and guidance. Brooke Forrester (Katherine Kelly Lang) will listen as Hope gets choked up over Liam moving on. She’ll admit she wanted this on some level, but she’ll come clean about truly wanting to be with Liam deep down.

However, Hope will think Liam seems happier without her. She’ll be basing that partly on Liam’s beach party behavior, but there may be more to it than that. Hope’s seen Liam interacting with Steffy and the girls. It warms her heart to see Liam being a full-time dad and all-around great family man.

Hope doesn’t believe she’ll ever be able to give Liam that, so she’ll think Steffy is the one for Liam. She’ll sense that Liam’s already better off without her, but Brooke obviously won’t agree. The Bold and the Beautiful spoilers say Brooke will think this is Thomas talking. She’ll suspect Thomas is basically brainwashing Hope into believing all this, so she won’t want Hope following his advice.

Brooke will argue that Liam is the one Hope should put her faith in. She’ll insist that Thomas can’t be trusted, but Hope will likely defend Thomas. Although B&B viewers can see Thomas’ shady agenda, he seems caring on the surface – especially to vulnerable Hope. Thomas has been pushy, but Hope will still believe it’s coming from a positive place.

Hope will certainly change her mind about that down the road! She’s in for a rude awakening when she finds out the truth about Emma Barber’s (Nia Sioux) death and how long Thomas has known about Beth Spencer’s survival. Some hot drama’s ahead, so we’ll give you updates as other B&B news emerges. Stay tuned to the CBS soap and don’t forget to check CDL often for the latest Bold and the Beautiful spoilers, updates and news.