BY Marcy Cohen on February 8, 2019 | Comments: one comment
Related : Soap Opera, Spoiler, Television, The Bold and the Beautiful 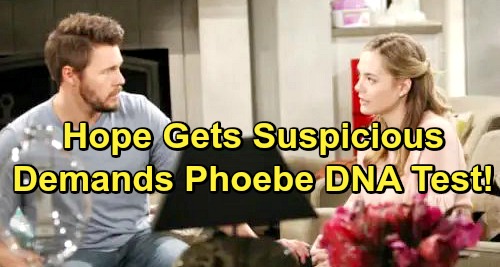 The Bold and the Beautiful (B&B) spoilers tease that Hope Spencer will keep trying to mend her broken heart. She’s finally found a cure for her pain, anger and regrets. When Hope’s cradling “Phoebe Forrester” (Isabella de Armas and Redford Prindiville) in her arms, her agony over Beth Spencer’s “death” melts away. Hope just can’t find anything else that makes her feel alive again.

As Hope’s attachment to “Phoebe” grows, so will concerns about Hope’s mental state. The Bold and the Beautiful spoilers say Hope will do some reflecting this week. She’ll think back to the night Beth “died” on Catalina Island and potentially remember something that raises red flags. We also know that Hope and Liam Spencer (Scott Clifton) noticed the birthmark the dead baby had on her leg.

That birthmark will inevitably come back into play later. Dr. Taylor Hayes (Hunter Tylo) gave Hope the phone number for a grief counselor and support group. There’s a good chance Hope will attend a meeting and cross paths with the dead baby’s true birth mom. The Bold and the Beautiful is clearly leaving a trail of baby breadcrumbs for Hope to follow.

Meanwhile, Hope will never be able to shake this amazing connection with “Phoebe.” She may even admit she feels like this little girl’s mom. Once the clues start to back that up, Hope could be on a mission to discover the truth.

B&B fans can expect Zoe Buckingham (Kiara Barnes) to unravel the mystery over the next couple weeks. However, she’ll most likely cover for Dr. Reese Buckingham (Wayne Brady) and keep this storyline going strong. Hot baby plots tend to take several months to play out. If the show wants to get the maximum impact out of this, they need to make sure Steffy has time to truly bond with “Phoebe.”

Luckily, that’ll give Hope plenty of time to hit some dead ends and try to connect the dots. Will she eventually confess to Liam that she thinks “Phoebe” is their child? Hope may know how crazy it sounds, but she could offer the birthmark proof if she has it by then. She could also point to Zoe’s suspicious behavior since we all know Zoe will be jumpy once she’s sitting on this bombshell.

Of course, the intense bond she feels will be the ultimate proof for Hope. She might know deep in her soul that THIS is her daughter. Unfortunately, all Hope may accomplish with her accusations is being labeled insane.

If she starts ranting about a DNA test, Liam could think Hope is losing it. As far as they know right now, this is just some random baby that Steffy Forrester (Jacqueline MacInnes Wood) adopted. Liam may feel like Hope needs professional help. She’ll inevitably get agitated if she’s not believed, so it wouldn’t be surprising if Hope was sedated and committed!

Do you think Hope will figure out the truth and be viewed as crazy? Will she land at a psychiatric facility over her wild baby story? We’ll give you updates as other B&B news comes in. Stay tuned to the CBS soap and don’t forget to check CDL often for the latest Bold and the Beautiful spoilers, updates, and news.