The Bold and the Beautiful Spoilers: Hope Furious At Liam and Steffy – Rages After ‘Steam’ Gangs Up On Thomas 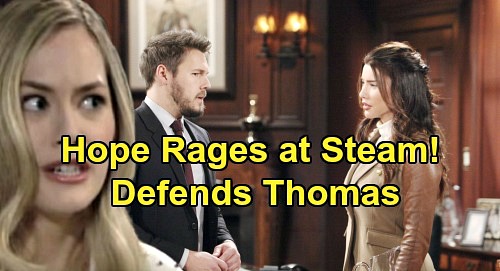 After Steffy sees Thomas hard at work before the upcoming fashion competition, she’ll see signs of the old Thomas – the fairly normal one she knew and loved. Steffy will hope this is a turning point for her brother, but Liam just won’t think that’s possible. He’ll feel like Thomas is a master manipulator and perhaps argue that Steffy’s falling for it, too.

However, Liam may promise that if their investigation clears Thomas, he’ll be willing to back off. That seems like a pretty fair deal. As long as Liam can accept the outcome either way, Steffy will be on board with pitching in. Deep down, B&B spoilers suggest Steffy will want the truth as well. She’ll want to believe Thomas is turning things around for the better, but she’ll know history could easily repeat itself.

The Bold and the Beautiful spoilers say Liam and Steffy will do their best to score the real story. They’ll get Zoe Buckingham (Kiara Barnes) involves and even try to drag Vinny Walker (Joe LoCicero) into this. Of course, Liam may regret spending so much time on this mission. It’ll just give Thomas an opportunity to pull Hope closer while Liam’s busy.

Plus, Hope should be furious that all this was going on behind her back. Once she finds out, Hope may complain about Liam’s lack of trust. She might indicate that she wants a romantic partner, not a controlling babysitter. Hope may not be pleased that Liam teamed up with his ex either! All roads seem to lead back to Steffy for Liam, so Thomas can play that up if he wants.

Since Hope will be bonding with Thomas as co-parents to Douglas Forrester (Henry Joseph Samiri) and partners on the fashion competition, she may rush to his defense. Hope might feel like Liam and Steffy are ganging up on Douglas’ father. The Bold and the Beautiful spoilers say more conflict is definitely brewing.

Thomas will eventually stun Hope by setting up a romantic evening with another woman – presumably Zoe Buckingham (Kiara Barnes). As a result, Hope may drop her guard and argue that “Steam’s” targeting Thomas for no reason. She may think Thomas has moved on when he’ll just be manipulating as usual.

Will Hope blast Liam and Steffy for their Thomas takedown efforts? Will Liam’s plan backfire and actually push Hope in Thomas’ direction? We’ll give you updates as other B&B news comes in. Stay tuned to the CBS soap and don’t forget to check CDL often for the latest Bold and the Beautiful spoilers, updates and news.