The Bold and the Beautiful Spoilers: Hope Gets Beth Back But Loses Liam – Steffy Pregnancy Revives Steam?

BY hellodrdavis on June 30, 2019 | Comments: one comment
Related : Soap Opera, Spoiler, Television, The Bold and the Beautiful 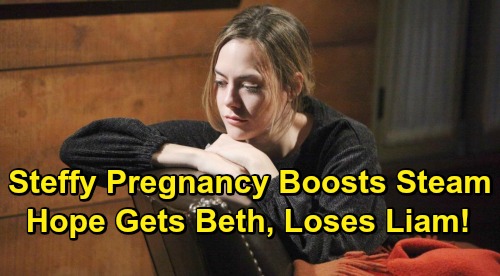 The Bold and the Beautiful spoilers tease that the big reveal about Beth Spencer is coming this summer. It’s been months since Hope Logan (Annika Noelle) and Liam Spencer (Scott Clifton) allegedly lost their daughter during childbirth. And now that their daughter is happily ensconced in Steffy Forrester’s (Jacqueline MacInnes Wood) home as Phoebe Forrester (River Davidson and Madeline Valdez), it may seem as though the storyline will never end.

But according to B&B spoilers, the reveal will happen, although we’ll have some major twists and turns before that occurs. Of course, Emma Barber’s (Nia Sioux) untimely death at the hands of Thomas Forrester (Matthew Atkinson) was a big twist, and viewers can expect much more.

One thing that B&B viewers may be wondering is what’s going to happen with Liam and Hope’s relationship once the big Beth reveal is made. Hope and Liam annulled their marriage at Hope’s request, but what will happen once Beth is back in the picture? Will Hope want Liam back as her husband and a full-time father to Beth?

Well, things on that front may get quite complicated, since B&B spoilers say that Liam and Steffy will soon make love. And afterwards, Liam will confess what happened to Hope, as he’ll feel that she should know. It certainly looks like this will make Hope decide to move on with Thomas and become a new mother to Douglas Forrester (Henry Joseph Samiri).

So, it seems that once the big Beth reveal is made – however that ultimately happens – Liam and Hope will be quite far apart, both physically and psychologically. But there’s another possible wrinkle here. Given that Steffy and Liam made love and that it was a very spontaneous event, there’s a good chance that Steffy could wind up pregnant.

And given that we’re probably a few weeks away from a Beth reveal, that means that we could see Liam and Hope find out that Phoebe is Beth right around the time that Steffy learns that she’s pregnant with Liam’s baby. That would certainly be a soapy situation that would stand in the way of a possible Lope reunion.

Imagine the logistics of Steffy, Liam, and Hope having to juggle Phoebe being Beth along with the reality of Steffy carrying Liam’s baby! In such a situation, it’s hard to imagine Liam and Hope successfully reuniting, so while Hope would be getting her precious daughter back, she’d almost certainly lose Liam in the process.

Of course, whether Steffy will end up being pregnant as a result of her night with Liam remains to be seen. But it’s certainly something within the realm of possibility! And it might be exactly what leads to a full-fledged Steam reunion and marriage.

Do you think Steffy will get pregnant? Stay tuned to the CBS soap and don’t forget to check CDL often for the latest Bold and the Beautiful spoilers, updates, and news.