The Bold and the Beautiful Spoilers: Hope Horrified After Thomas Plants a Kiss – Thope Mission Setback, But Thomas Presses On

BY Heather Hughes on May 1, 2019 | Comments: 2 comments
Related : Soap Opera, Spoiler, Television, The Bold and the Beautiful 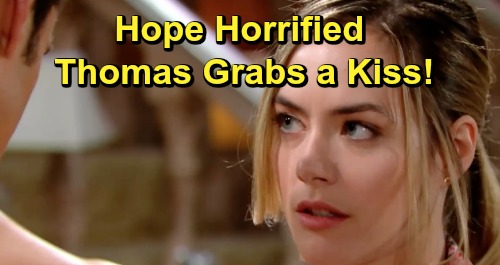 The Bold and the Beautiful (B&B) spoilers tease that Thomas Forrester (Matthew Atkinson) will make some daring moves in his mission to win Hope Spencer (Annika Noelle) back. He’ll start by reiterating that Liam Spencer (Scott Clifton) belongs with Steffy Forrester (Jacqueline MacInnes Wood) and the girls. Thomas will even have some photo evidence to back him up.

After pestering Steffy to send some pictures of the “Steam” crew, Thomas will score the perfect one to show Hope. He’ll tell Steffy that Douglas Forrester (Henry Joseph Samiri) has been dying to see new pics of Kelly Spencer (Zoe Pennington and Chloe Teperman) and “Phoebe Forrester” (Isabella de Armas and Rosalind Aune). Thomas will clearly say whatever he has to say and do whatever he has to do here.

The Bold and the Beautiful spoilers say Thomas will get a gorgeous “Steam” family photo on his phone, so he’ll let Hope take a look. He’ll assure Hope that she was right; Liam’s right where he needed to be. Thomas will take things a step further by suggesting this is their chance to heal together. He’ll want to be there for Hope while she supports Douglas, but Hope won’t quite catch on.

Thomas will insist that Hope has to be strong and let Liam live under one roof with his family permanently. He’ll promise Hope that she’ll never be alone, but Hope will still think Thomas means he wants her to co-parent Douglas with him. She won’t feel like she can fill that role in the same way Caroline Spencer (Linsey Godfrey) could.

B&B spoilers say Thomas will finally grasp Hope by the shoulders. He’ll make his point crystal clear by suggesting that they fell for each other once and can do it again. Thomas will point out that there’s life after Liam. He’ll want Hope to move on with him, so he’ll grab her face and kiss her to seal his desperate plea.

A shocked Hope will recoil in horror, so this move won’t turn out as well as Thomas expects. However, Thomas isn’t the kind of guy who gives up. He’ll undoubtedly keep plotting and count on a future with Hope to happen sooner or later.