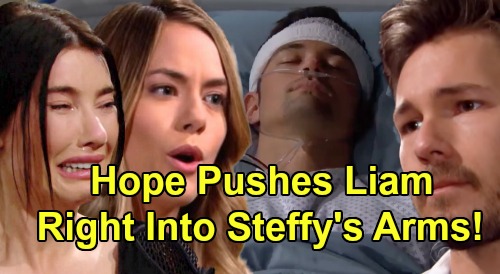 The Bold and the Beautiful (B&B) spoilers tease that Thomas Forrester (Matthew Atkinson) will soon be on redemption road. He finally softened a bit during his latest chat with Douglas Forrester (Henry Joseph Samiri), but his obsession with Hope Logan (Annika Noelle) still drove him to confront her. There seems to be an inner battle going on within Thomas, so that should be addressed eventually.

Thomas will be in a coma thanks to his cliff fall, which could reveal a brain tumor or some other medical issue that might’ve been causing his behavior. Regardless, easing up on Douglas and suffering this crisis seem like steps toward redemption. B&B may be able to build on that and hopefully show Thomas’ remorse as this storyline moves forward.

However, Ridge Forrester (Thorsten Kaye) and Brooke Forrester (Katherine Kelly Lang) could be headed for trouble. He’ll accuse Brooke of trying to kill Thomas by giving him that shove, but she’ll insist the fall was accidental. Brooke never would’ve intentionally murdered her husband’s son. Brooke and Ridge always manage to find some problem to disagree on, and it’s a huge one in this case.

The Bold and the Beautiful spoilers say “Bridge” could start to crumble, which could bring guilt for both Hope and Thomas. They may feel responsible if their parents’ marriage could potentially come to an end. Hope may also cut Thomas some slack as he proves to be a kinder version of himself. As Thomas’ redemption kicks into gear, Hope might forgive him – especially for Douglas’ sake.

Hope insisted she didn’t want anything to do with Thomas, but that will change thanks to his ordeal. She may agree to still have some family time with Douglas, even though she wants out of the marriage. It’s easy to imagine Hope actually bonding with Thomas in time. That’s just how B&B rolls! Romances are complicated and the hate in characters’ hearts can quickly turn to love.

Naturally, Liam Spencer (Scott Clifton) wouldn’t be happy about that. “Lope” may be on cloud nine with Beth Spencer (River Davidson and Madeline Valdez) right now, but how long can that really last? The Bold and the Beautiful spoilers say Liam and Hope could face conflict just like Ridge and Brooke. Perhaps Thomas’ hospital crisis will send them all on new paths sooner or later.

Liam would inevitably lean on Steffy for support, which would give him another opportunity to waffle. Will Hope drift toward Thomas and push Liam right back into Steffy’s arms? We’ll give you updates as other B&B news comes in. Stay tuned to the CBS soap and don’t forget to check CDL often for the latest Bold and the Beautiful spoilers, updates and news.