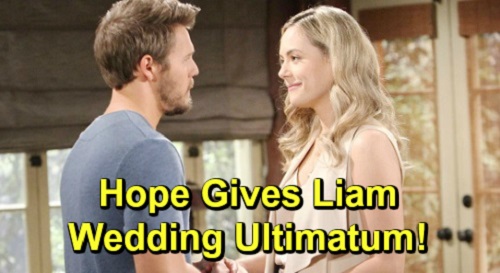 The Bold and the Beautiful (B&B) spoilers tease that Hope Logan (Annika Noelle) and Steffy Forrester (Jacqueline MacInnes Wood) will face off over Liam Spencer (Scott Clifton). Hope was counting on Steffy to let Liam go and find her own path. Liam suggested Steffy knew his heart was with Hope, but that won’t stop Steffy from wishing it was with her instead.

Now that Steffy has had some time to adjust to losing Beth Spencer (River Davidson and Madeline Valdez), she’ll begin to wonder what might’ve been. It’ll be hard for Steffy to think she got so close to her perfect family with Liam and the girls. Of course, Beth belongs to Hope and is right back where she should be. Both Hope and Steffy were victims, but it was necessary to undo the baby switch.

Even so, Steffy will reflect on growing closer to Liam after his annulment. She’ll confess her lingering feelings after Liam sneaks Beth over for a visit, so it won’t take long for Hope to find out. The Bold and the Beautiful spoilers state that a vicious Hope and Steffy battle will follow.

All this drama will leave Hope more convinced than ever that Steffy needs a clear message. She’ll want Liam to tell Steffy that Hope’s his future, but maybe there’s a better way than just saying it. After all, words never seem to mean much on a soap. Hope could easily decide Liam needs to take a bolder stance with his ex. She may push Liam to remarry her as soon as possible.

That would certainly let Steffy know where Liam stands, but would Liam grant Hope’s request – or demand if that’s the way she wants to play this? Hope might even give Liam an ultimatum here. She could insist that Liam needs to make a choice once and for all. If he doesn’t, Liam might lose Hope forever – at least as long as forever lasts on B&B.

Liam might be willing to go along with plans for a wedding, but that doesn’t mean the ceremony would be completed. A lot can go wrong when a couple’s nuptials are in the works. That’s especially true when Thomas Forrester (Matthew Atkinson) is plotting and Steffy’s still carrying a torch for Liam.

Whatever the case, The Bold and the Beautiful spoilers say Hope will be a jealous mess. Liam will have his hands full as he tries to play peacemaker and ease Hope’s mind. We’ll give you updates as other B&B news comes in. Stay tuned to the CBS soap and don’t forget to check CDL often for the latest Bold and the Beautiful spoilers, updates and news.