BY Kinsley Goldman on April 10, 2019 | Comments: one comment
Related : Soap Opera, Spoiler, Television, The Bold and the Beautiful 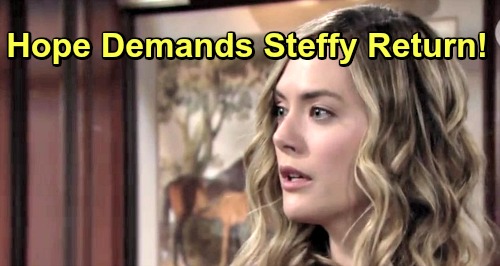 The Bold and the Beautiful (B&B) spoilers tease that Hope Spencer’s (Annika Noelle) obsession could come back stronger than ever. When Steffy Forrester (Jacqueline MacInnes Wood) decided to leave for Paris with the girls, she had a couple goals in mind. For starters, Steffy wanted to give Hope and Liam Spencer (Scott Clifton) a chance to work on their marriage without distractions.

However, Steffy also wanted to put some distance between Hope and “Phoebe Forrester” (Isabella de Armas and Redford Prindiville). She could see that Hope was becoming too attached, so she decided to put up a barrier for Hope’s own good. Steffy thought this might help Hope deal with her grief, but she couldn’t have predicted the paternity shocker that’d happen in her absence.

The Bold and the Beautiful spoilers say Hope will be thrilled to learn Flo is a Logan. Storm Logan (William deVry) was Flo’s biological father, so things may click into place for Hope – at least in terms of what she’ll know at that point. Hope felt such a strong connection with “Phoebe,” so she may believe this is why. She’ll inevitably think she must’ve sensed that “Phoebe” was part of the family.

B&B fans know “Phoebe” is indeed part of the fam since she’s actually Beth Spencer, Hope’s presumed dead daughter. The truth will stay buried for a while, but that won’t stop Hope from stirring up trouble. The Bold and the Beautiful spoilers say Hope may once again latch on to the idea of bonding with “Phoebe.” She’ll be eager to see the baby once Steffy gets back.

Hope might even give Steffy a call and encourage her to come home right away. Naturally, that could set off alarm bells for Steffy. She may decide to stay away even longer if she thinks Hope’s going to stick to “Phoebe” like glue when she gets back. Since Jacqueline MacInnes Wood is still on maternity leave, that’d be an easy way to explain Steffy remaining in Paris for so long.

Nevertheless, Hope’s “Phoebe” obsession can’t permanently disappear. How could it when Hope has every reason to be drawn to her daughter? We’ll give you updates as other B&B news comes in. Stay tuned the CBS soap and don’t forget to check CDL often for the latest Bold and the Beautiful spoilers, updates, and news.