The Bold and the Beautiful Spoilers: Hope & Thomas Find Comfort Together – Lope Threatened, Liam Left Out In The Cold

BY hellodrdavis on March 18, 2019 | Comments: one comment
Related : Soap Opera, Spoiler, Television, The Bold and the Beautiful 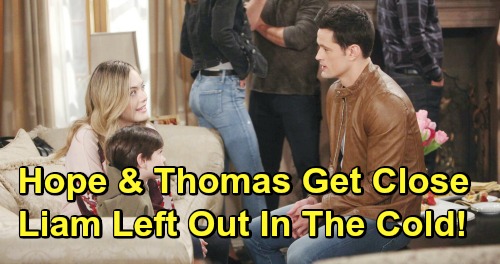 The Bold and the Beautiful spoilers tease that Hope Spencer (Annika Noelle) will finally find some sources of comfort in her deep grief over the loss of her daughter Beth Spencer. Hope has really had a tough time the past couple of months as she’s dealt with Beth’s death. Liam Spencer (Scott Clifton) has done everything in his power to help Hope, but she has been finding it difficult to move on with her life.

But then another B&B tragedy occurred. Caroline Spencer (Linsey Godfrey) passed away, which brought Thomas Forrester (Matthew Atkinson) and Douglas Forrester (Henry Joseph Samiri) back to Los Angeles. Hope immediately connected with little Douglas, as her maternal instincts kicked in. Their friendship is good for Douglas, as he’s just lost his mother, and it’s healing for Hope, too.

According to B&B spoilers, Hope will soon find comfort in Thomas as well. The two friends will reconnect as they’re each dealing with their respective grief. Hope has been feeling for a while that no one really understands her grief, and now that Thomas has surfaced having experienced his own terrible loss, she may consider him to be a kindred spirit.

Look for Thomas to be touched when he notices Hope taking Douglas under her wings. B&B spoilers say that he’ll be sincerely moved when he observes Hope telling Douglas stories and taking on a motherly role with him. That will likely lead Hope and Thomas to talk and share their grief stories with each other. It should do each of them a considerable amount of good.

But we can’t forget that Hope and Thomas are not only friends, but they used to be romantically involved. And it’s very possible that Liam might have a problem with Hope and Thomas reconnecting too much. Of course, Liam wants Hope to process her grief in a productive way and move on with her life, so he probably wouldn’t begrudge her a conversation or two with Thomas.

But Liam probably will start to worry if Hope and Thomas start to become too close. Liam has tried desperately to get Hope to open up to him, but she’s been reluctant to do so. Hope hasn’t felt that Liam has understood her grief, and she’s largely isolated and shut herself off from him. If she then goes forward and opens up to Thomas, Liam could end up feeling hurt and left out in the cold, Lope could be threatened.

Time will tell just how close Hope gets to Thomas, and whether it will have a detrimental effect on Lope’s marriage. But Liam and Hope are already on shaky ground. After all, it was just a couple of weeks ago when Hope took off her wedding ring and tried to push Liam and Steffy Forrester (Jacqueline MacInnes Wood) back together.

Do you think that Thomas and Hope’s newfound connection will threaten Hope’s relationship with Liam? Could we be looking at a new B&B triangle? Stay tuned to the CBS soap and don’t forget to check CDL often for the latest Bold and the Beautiful spoilers, updates, and news.