The Bold and the Beautiful Spoilers: Hope Thrilled Over Instant Bond with Phoebe Birth Mom – Guilty Flo Decides To Confess

BY Heather Hughes on March 1, 2019 | Comments: one comment
Related : Soap Opera, Spoiler, Television, The Bold and the Beautiful 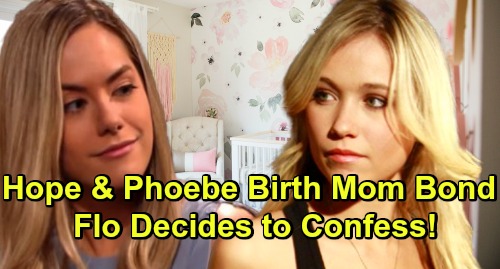 Flo realizes that as well, but she’ll keep the secret and cozy up to Hope during new B&B episodes during the week of March 4-8. She’s feeling terribly guilty about this baby swap and things are only going to get worse after she hears Hope talking to Katie Forrester (Heather Tom). The Bold and the Beautiful spoilers say Flo will want to grow closer to Hope. She’ll be longing to console her in some way.

It turns out Flo will actually manage to do that. She’ll hit things off with Hope right off the bat – in part because of her birth mother claims. Hope adores “Phoebe,” so Flo’s connection to her will be awfully appealing. That’s especially true since Hope believes Flo gave her own child up for adoption.

Hope has suffered a tremendous loss, so she’ll think Flo can relate on some level. “Phoebe” didn’t die, but Hope will still think Flo can understand the gaping hole she’s dealing with. She’ll feel like Flo must get what it’s like to carry a baby and not have that baby in her life.

Flo didn’t carry “Phoebe” at all, but she’ll play the part of a grieving mom. However, she’ll really be opening up about the crushing grief of this secret. Flo certainly has regrets and she’ll have even more after she begins bonding with Hope. The weight of this scheme will almost be too much to bear.

Hope will feel better knowing she has a friend who somewhat shares her experience. The fact that Flo is linked to “Phoebe” specifically will be icing on the cake. Hope could even start to heal a bit thanks to Flo’s presence in her life, but Flo’s massive secret will rip her apart.

It won’t be long until Flo decides she’s ready to spill the baby swap news and live with the consequences. Naturally, Zoe Buckingham (Kiara Barnes) and Dr. Reese Buckingham (Wayne Brady) won’t approve! B&B spoilers say Flo will have some close calls when it comes to confessions in the coming weeks, but unfortunately she should keep her mouth shut as promised.