The Bold and the Beautiful Spoilers: Hope Warns Steffy to Back Off, Gets Territorial Over Liam – Love War Reignites 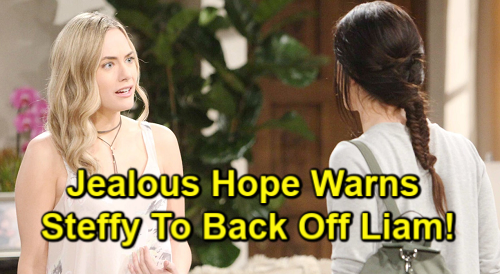 The Bold and the Beautiful (B&B) spoilers tease that Hope Logan (Annika Noelle) may be her own worst enemy. Thomas Forrester (Matthew Atkinson) could add fuel to the fire, but Hope herself may be a huge threat to her own happiness.

At first, Hope may try to convince herself it’s nothing. Steffy and Liam are great co-parents to Kelly Spencer (Zoe Pennington), so they have to keep in touch.

Liam’s also been adamant about being there for Steffy since she lost “Phoebe Forrester” aka Beth Spencer (River Davidson and Madeline Valdez). He’s committed to Hope, but he can’t turn his back on Steffy. Liam still cares about Steffy and always will.

The Bold and the Beautiful spoilers say Hope will try to respect that, but she’s been down this flip-flopping road too many times. It won’t be long until her worst fears take over. Hope may confront Liam about the message and get a reasonable explanation, but will that be enough? Perhaps Hope will choose to take the issue up with Steffy herself eventually.

It’s easy to imagine Hope paying Steffy a visit and mentioning her communication with Liam. Will Hope make it clear that they’re to remain friends and nothing more?

She Has Watched Liam Spencer And Steffy Forrester Reunite Before

Hope could become a bit territorial since she’s watched Liam and Steffy reunite more than once. She finally got her family back, so she’ll definitely have concerns about it all falling apart.

Unfortunately, Hope’s jealous side could cause more problems. B&B fans know Liam won’t approve if Hope lashes out at Steffy in any way. It could become a big deal if Hope can’t control the green-eyed monster. As for Steffy, she’ll surely deny that anything romantic is going on. However, that may not be the case forever!