BY hellodrdavis on July 18, 2019 | Comments: 2 comments
Related : Soap Opera, Spoiler, Television, The Bold and the Beautiful 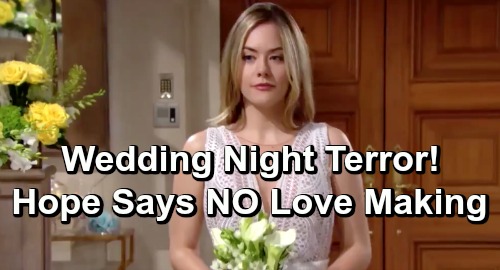 The Bold and the Beautiful spoilers tease that Hope Logan (Annika Noelle) will have some seriously mixed feelings about her upcoming wedding to Thomas Forrester (Matthew Atkinson). On the one hand, she’s the one who wants a quick wedding for Douglas Forrester’s (Henry Joseph Samiri) sake. After Douglas was deliberately scared by Thomas’ ghost stunt, Hope decided that they must become a family unit right away.

But Hope wasn’t thinking things through when she reached that snap decision about a quick wedding, and now the reality of what she’s agreed to – and what she’ll face as soon as the wedding’s over – is sinking in. Thomas has approached Hope on a couple occasions about being intimate with him, and Hope has put him off by saying she’s not ready, but that position is going to become difficult to maintain after the wedding’s over.

After all, the honeymoon is traditionally a time when a newly married couple connect intimately. Thomas and Hope may not have a traditional honeymoon, given how quickly this wedding is being put together, but there will certainly a wedding night, and Thomas will likely expect some intimacy from his wife. Even though Hope has stated that she’s not sure when she’ll be ready to make love, Thomas will probably be expecting something on their wedding night.

Hope Logan Wants Douglas Forrester To Have A Complete Family

As wedding plans get underway and the wedding nears, Hope’s going to have all of this on her mind. She wants Douglas to have security and a complete family, but she’ll also know that being a “real” family means that she and Thomas will need to be husband and wife in every sense. And that will likely terrify Hope.

Of course, for Hope, there is more than one obstacle in place for making love with Thomas. First off, she doesn’t love Thomas yet, and it would be hard for Hope to make love with someone she doesn’t completely love and trust. Then there’s the issue of a possible pregnancy. Hope could barely stand to make love with Liam Spencer (Scott Clifton) after their daughter Beth Spencer died, partly out of grief but also out of fear of getting pregnant again.

It’s really difficult to imagine Hope ever feeling comfortable making love with Thomas, given that she doesn’t love him and that she’s still pining over Liam, not to mention the fear of getting pregnant again. And that’s going to lead to some conflict with Thomas…and she knows it.

And so look for some serious dread to set in as Hope approaches her wedding. According to B&B spoilers, Hope will seriously contemplate what she’s about to do on her wedding day, and we can’t help but think that part of what will concern her is the thought of what Thomas will be expecting physically once they’re married.

B&B spoilers also say that Hope’s entrance at the wedding will be delayed, so it looks like we might see a missing bride scenario, at least for a few moments as Hope mulls over what she’s about to do. Ultimately, though, it looks like she and Thomas will finally tie the knot, and then Hope will go into uncharted territory…as a married woman who doesn’t want to sleep with her husband.

How do you think Hope will handle her delicate situation with Thomas, once they are married? Stay tuned to the CBS soap and don’t forget to check CDL often for the latest Bold and the Beautiful spoilers, updates, and news.