The Bold and the Beautiful Spoilers: Hope’s Out For Revenge – Punishes Beth Secret Keepers 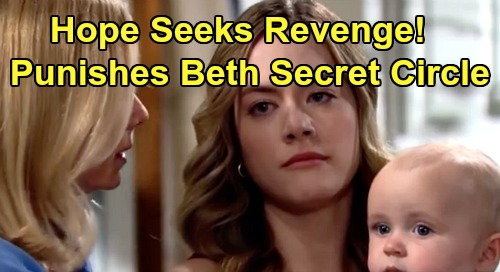 The Bold and the Beautiful spoilers tease that Hope Logan (Annika Noelle) will soon be in a position of power. Right now, she’s overjoyed to have her daughter Beth Spencer (River Davidson and Madeline Valdez) back, and that joy will probably consume her for a while. That, and the struggle that’s inevitably coming between herself and Steffy Forrester (Jacqueline MacInnes Wood) for possession of Beth, will be about all she can process for the near future.

But when the dust settles and Hope finally gets her daughter home with her, the reality of the vast conspiracy that existed against her is going to set in. Hope was seriously victimized by Reese Buckingham (Wayne Brady), and then numerous people came along who could have done something to return Beth to her, but they deliberately and selfishly chose not to.

Of course, Reese is out of the country and may never be seen or heard from again, so punishing him may not even be an option for Hope. But there will be others who will surely bear the brunt of Hope’s wrath soon enough. First off, there will be Florence “Flo” Fulton (Katrina Bowden), who’s been lying to Hope and everyone else from the moment she set foot in Los Angeles.

The Bold and the Beautiful spoilers reveal that Hope’s going to reel when she hears from Liam Spencer (Scott Clifton) about how Flo came to Los Angeles with the specific goal of helping Reese with his scheme. Sure, Flo didn’t know about the baby swap aspect of the scheme until a bit later, but she still had multiple opportunities to come forward and didn’t. And even after Flo learned that she was Hope’s cousin, she still didn’t come forward.

Well, it seems that Flo will soon try to explain herself to Hope, and it’s not going to go well. According to B&B spoilers, Flo and Shauna Fulton (Denise Richards) will decide to sneak into Hope’s cabin, in an attempt to explain themselves and give Hope their side of the story. But Hope’s not going to be in the mood to hear excuses, and it’s hard to imagine her accepting any version of Flo or Shauna’s truth about this matter.

It’s also hard to imagine Hope accepting any kind of apologies or excuses from Zoe Buckingham (Kiara Barnes) or even Xander Avant (Adain Bradley) at this point. And she’s going to be absolutely outraged at how Thomas Forrester (Matthew Atkinson) deceived her and used her grief to manipulate her into becoming his wife and a mother to Douglas Forrester (Henry Joseph Samiri).

Hope will surely get her showdown with Thomas at some point in the future, although B&B spoilers say that he’s going to remain in hiding for a while. Something tells us that at least in the short term, Flo is going to bear the brunt of Hope’s fury.

Of course, Hope’s not just going to be angry with Flo…she’s going to want to see justice be done as well. Flo didn’t just lie; she committed some serious crimes. B&B spoilers indicate that Detective Alex Sanchez (Jeremy Ray Valdez) will be back on canvas starting on August 19, and he’ll be airing through September and possibly longer, so it looks like Hope will probably call the cops on Flo and the others who were involved in the Beth coverup.

Of course, Hope’s not going to be alone in this fight. Liam will also want to see justice done, as well as Steffy, who was also a victim in this scenario. And Brooke Forrester (Katherine Kelly Lang) and Ridge Forrester (Thorsten Kaye) will surely be leading the charge against those responsible, although Ridge will be in a tricky position where his own son’s guilt comes into play.

But as for Hope, she’ll be feeling a special kind of hurt and a special kind of anger. She’ll know that all of these people involved in the coverup saw how her life was spiraling out of control without her daughter in it, yet they chose not to tell her that her that Beth was alive. It will be interesting to see exactly how she chooses to exact her revenge, and if she ultimately goes down a dark path to make those responsible suffer.

Do you think that pursuing legal action against Flo et al. will be enough for Hope? Or do you think she’ll find other ways to make them all pay? Stay tuned to the CBS soap and don’t forget to check CDL often for the latest Bold and the Beautiful spoilers, updates, and news.