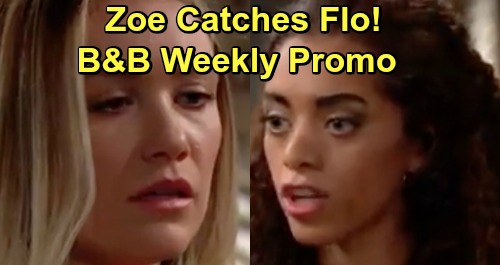 The Bold and the Beautiful (B&B) spoilers preview and promo video for the week of February 4-8 tease that Dr. Reese Buckingham’s (Wayne Brady) plan will hit a major snag. He feels like his scheme is all wrapped up, but there are some loose ends he left dangling. One is Zoe Buckingham’s (Kiara Barnes) suspicious nature and the other is Florence “Flo” Fulton (Katrina Bowden) presence in Los Angeles.

These threats will collide in a big way this week as Zoe seeks answers about her father’s strange actions over the last few weeks. She’ll be even more on edge when she learns Reese plans to leave town immediately. Zoe will naturally assume Reese is in some kind of trouble. She won’t buy his excuses, so she’ll opt to search his apartment and hope she can get some hints to help her understand.

Once Zoe starts digging around, she’ll run into Flo and wonder what her real connection to Reese entailed. Zoe will assume that Flo played a role in whatever drove Reese away, so she’ll pummel Reese’s partner in crime with questions. The Bold and the Beautiful spoilers say Flo will do her best to get rid of Zoe. She’ll artfully dodge this grilling session and send Zoe on her way home.

However, Zoe just won’t be able to shake this feeling that Flo’s got a secret. She’ll believe some illegal activities may have done down, so she’ll worry about Reese’s part in them. B&B fans can expect Zoe to meet up with Xander Avant (Adain Bradley) and express her concerns. Xander will ask if Zoe thinks something shady is going on, so she’ll admit she does. Zoe will refuse to back down until she gets the truth.

The Bold and the Beautiful spoilers say Zoe will track Flo down again for another faceoff. She’ll make it clear that she won’t be ignored this time. It looks like Flo will either let something slip or Zoe will stumble across some sort of baby clue. Regardless, Zoe will put enough puzzle pieces together to guess this is connected to “Phoebe Forrester” (Rosalind Aune and Isabella de Armes).

Once Zoe’s armed with that information, the suspense will really start to build. Steffy Forrester (Jacqueline MacInnes Wood) is Zoe’s boss, so there’s no way she can just let this go. Flo will keep trying to play dumb, but Zoe won’t allow it. B&B’s weekly preview video shows an angry Zoe shouting, “I need to know what’s going on, and I need to know how it involves Steffy Forrester’s baby!”

The Bold and the Beautiful spoilers hint that Flo just might crack under the pressure. Will Zoe learn the whole ugly story or at least part of it? Zoe seems poised to join the secret club, so she’ll have to decide what to do with what she finds out.

Meanwhile, Steffy will fall more madly in love with “Phoebe” every day. The longer this lie carries on, the harder it’ll be for Steffy when it all falls apart. We’ll give you updates as other B&B news comes in. Stay tuned to the CBS soap and don’t forget to check CDL often for the latest Bold and the Beautiful spoilers, updates, and news.