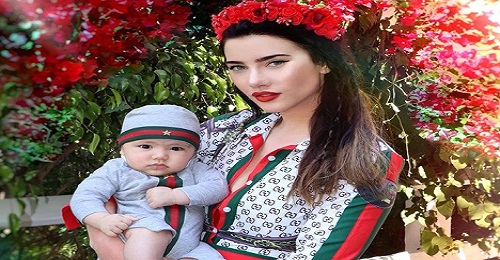 The Bold and the Beautiful (B&B) spoilers reveal that one CBS soap star had high praise for a fellow cast member. B&B fans know Darin Brooks as Wyatt Spencer, a sweetheart both onscreen and off. In a recent issue of Soaps in Depth, Brooks was asked which of his costars impresses him the most in terms of what they’ve accomplished. He admitted he had a tough time deciding since he works with so many impressive people!

However, there was one that really stood out to Brooks. He settled on Jacqueline MacInnes Wood (Steffy Forrester) for being a supermom and juggling so much in her life right now. “She’s got her little baby, and I’m so proud of her and [her husband] Elan and so happy for them,” Brooks said. Aww!

Of course, Brooks didn’t stop there. He just had to gush over Wood a bit and give her major props for the awesome stuff she’s got going on. “What she’s accomplished in her life and the things that she’s done with her Instagram and on the show and seeing her blossom into this leading lady on the show…she’s the first one that comes to mind,” Brooks insisted.

It’s clear that Brooks is beaming with pride over his costar and friend. The Bold and the Beautiful cast seems like a pretty tight squad, so it’s nice to see them celebrating each other. Brooks’ kind words were undoubtedly appreciated by Wood, who’s indeed rocking it in all areas of her life right now.

Many B&B fans aren’t seeing as much Steffy as they’d like at the moment, but part of that may be due to Wood’s busy schedule. As long as she’s happy, that’s what matters! Wood seems more focused on Mommy duties, but The Bold and the Beautiful spoilers say Steffy will indeed pop up more this fall.

Brooks concluded his little interview by suggesting that he’s so glad to see Wood at this stage of her life. She appears truly content and that’s an amazing thing. “I think it’s just beautiful,” Brooks said.

As for what’s next on B&B, expect Thomas Forrester (Matthew Atkinson) to be a troublemaker as usual! The Bold and the Beautiful spoilers say some exciting scenes are coming up, so don’t miss all the action. We’ll give you updates as other news comes in. Stay tuned to the CBS soap and don’t forget to check CDL often for the latest Bold and the Beautiful spoilers, updates and news.