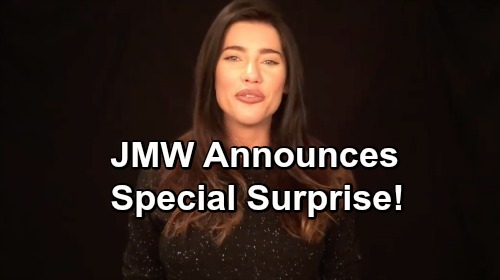 The Bold and the Beautiful spoilers has some exciting news to pass on for B&B fans everywhere! CBS has announced that “something special” is coming to social media on Monday, February 4, for B&B fans.

A very special video message was recently posted to the official B&B Facebook page and Twitter feeds announcing that something’s coming on Monday for fans. On the video, Jacqueline MacInnes Wood (Steffy) appears and says the following: “It’s almost Valentine’s Day and The Bold and the Beautiful is celebrating all month long. So make sure you check out our social media page on Monday for something special.”

Whatever is planned, it’s sure to be exciting for fans, and it seems to have to do with romance, given the Valentine’s Day reference. Perhaps it will be a retrospective of some favorite moments from some key B&B couples over the years. We might be treated to a montage of Steam, Bridge, Brill, or Lope scenes throughout the years.

Or maybe the surprise will be some behind-the-scenes looks at some upcoming love scenes. Wyatt Spencer (Darin Brooks) and Sally Spectra (Courtney Hope) have had some steamy scenes lately, so you never know!

B&B invited fans to comment with guesses about what the special surprise is, and many fans guessed that there may be some sort of sudden resolution to the current baby swap storyline, or perhaps Jacqueline MacInnes Wood will announce that she’s had her baby. But we’re betting on something more attuned to Valentine’s day and romance.

What do you think the “something special” for fans will be? Stay tuned to the CBS soap and don’t forget to check CDL often for the latest Bold and the Beautiful spoilers, updates, and news.