BY hellodrdavis on May 9, 2019 | Comments: Leave Comments
Related : Soap Opera, Spoiler, Television, The Bold and the Beautiful 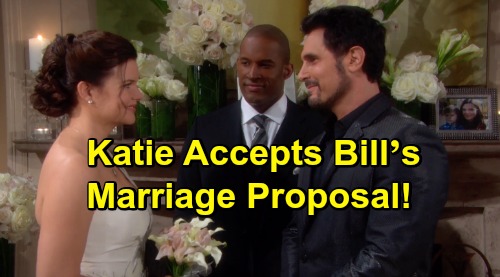 The Bold and the Beautiful spoilers tease that Katie Logan (Heather Tom) and Shauna Fulton (Denise Richards) will pull a fast one on Bill Spencer (Don Diamont). Bill has been moping around ever since Katie turned down his surprise marriage proposal, but what he doesn’t know is that Katie nearly reversed her decision. There was just one problem: Katie saw Bill enjoying drinks with Shauna and that gave her pause.

But it looks like Katie isn’t going to give up on Bill. Brooke Forrester (Katherine Kelly Lang) and Donna Logan (Jennifer Gareis) have been encouraging Katie to give Bill another chance, and Katie really wants to do so, but she’s torn. According to B&B spoilers, she’ll want some assurances that Bill isn’t interested in any other women.

That’s where Shauna will come in. Katie will enlist Shauna to help her test Bill’s loyalty to her. She’ll ask Shauna to try to seduce Bill, to see if Bill takes the bait, or whether he remains true to Katie. Shauna will agree, and she’ll approach Bill with her sexiest seduction routine.

The Bold and the Beautiful spoilers say that Shauna will get so far as to plant a big kiss on Bill, but to Bill’s credit, he’ll end the kiss and tell Shauna that he’s not interested in her advances. That’s good news for Katie, and good news for Bill, since Katie will either be watching the whole exchange or get updates from Shauna later.

After Bill passes the seduction test, Katie will know what she has to do. Exactly how it will transpire remains to be seen, but Katie will approach Bill and end up accepting his marriage proposal. It looks like we’re in for another B&B wedding coming up soon.

We’ll see if Katie confesses to Bill about being in cahoots with Shauna, but we’d bet that she’ll probably come clean at some point. Nobody will be happier about the engagement than Will Spencer (Finnegan George), as it means that his parents will be reuniting, just as he’s wanted. It’ll be good news all around!

What do you think? Are you glad that Katie and Bill will be tying the knot again? Stay tuned to the CBS soap and don’t forget to check CDL often for the latest Bold and the Beautiful spoilers, updates, and news.