The Bold and the Beautiful Spoilers: Katie Asks Shauna To Check If Dollar Bill Is Dead or Alive

BY Sean O'Brien on May 12, 2019 | Comments: one comment
Related : Soap Opera, Spoiler, Television, The Bold and the Beautiful 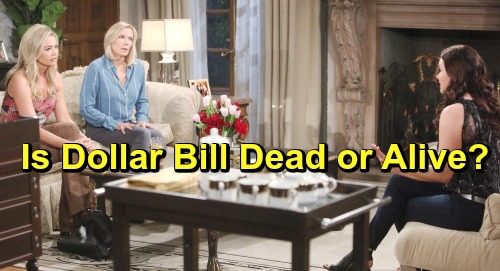 The Bold and the Beautiful spoilers tease that Katie Logan (Heather Tom) still loves Bill Spencer (Don Diamont). But before risking her heart and the chance that her son could be hurt by a failed reunion, Katie is conspiring with Shauna Fulton (Denise Richards) to see if Dollar Bill is still alive.

Bill didn’t quite recall being with Shauna all those years ago in Las Vegas, Nevada. That’s why he defiantly said that Flo Fulton (Katrina Bowden) wasn’t his child. That part of Bill’s recall proved true, but a memory jog did reveal that he had known Shauna, however briefly.

Katie is relying on Bill’s history with Shauna, his recent statements about her still being attractive, and her willingness to go along. Katie wants Shauna to play up to Bill to see if he’s reformed, as appears possible, or he’s still a carouser.

It makes sense that Katie is cautious, considering all that she’s endured. Bill has openly asked her to get back together, but resistance followed. Katie’s consideration isn’t just based on her own past with Bill, but also on how Will Spencer (Finnegan George) could be affected.

Katie told Bill a few weeks ago that she would be okay with risking her heart if it was just her. But what she fears is a revival with Bill will be followed by him reverting to his old ways. That’s why the aforementioned Dollar Bill reference makes sense and could, easily, come into play.

Richards is a fine addition to the cast. In addition to playing the backstage mom role to the hilt, where Bowden’s character is concerned, Shauna also has eyes for the good life. She’s a little rough around the edges, as Flo knows, but also is sharp.

Of course Quinn Forrester (Rena Sofer) wouldn’t want her old friend from Vegas being anywhere near Bill, even if she’s just helping Katie with this ruse. But Shauna didn’t feel the need to consult Quinn, fully knowing what was said about who Bill once was.

It feels as though B&B is writing some humor into the script in having Shauna voluntarily agree to tempt Bill. If this assumption is right, Katie’s fears will prove unfounded and Bill will tell Shauna no, or even say that he’s still in love with Katie.

The time for a Batie reunion is right. Tom, Diamont, and George have terrific on-screen chemistry together. Fictionally speaking, Katie, Bill, and Will make a nice family, with its restoration projecting as a redemption storyline.