The Bold and the Beautiful Spoilers: Liam and Hope Go to Extremes for Douglas’ Sake – Use Shocking Strategies to Keep Thomas Away

BY Heather Hughes on September 25, 2019 | Comments: one comment
Related : Soap Opera, Spoiler, Television, The Bold and the Beautiful 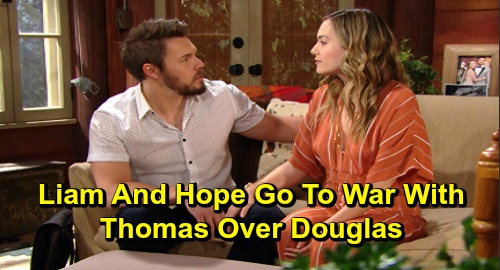 The Bold and the Beautiful (B&B) spoilers tease that Hope Logan (Annika Noelle) and Liam Spencer (Scott Clifton) will stand against Thomas Forrester (Matthew Atkinson). Ridge Forrester (Thorsten Kaye) has never been able to see Thomas for the villain he became during the baby mayhem. He views Thomas as a lost soul who simply made a mistake.

In reality, Thomas made many terrible choices and ignored plenty of chances to correct them. He can give whatever sob story he wants, but his behavior speaks for itself. That’ll continue to be the case as Thomas resorts to more manipulation. He’ll once again destroy lives and relationships in the coming months, so it’s clear that Thomas has learned nothing at all.

By the end of all this, Ridge may see that he should’ve let Thomas suffer the consequences for his decisions. However, let’s focus on Liam and Hope for now. They were wary of Thomas’ attitude adjustment after he woke up in the hospital – and with good reason. Thomas is a master manipulator, so you can never really tell what’s going on in that head of his.

The Bold and the Beautiful spoilers say Thomas just can’t be trusted, and he’ll prove through his continued scheming. It won’t take Hope and Liam long to realize Thomas is still dangerous. They can’t let Thomas be around Douglas Forrester (Henry Joseph Samiri) like this, let alone raise him. No one wants sweet Douglas to turn into a Thomas Mini-Me, who’ll grow up to be just as devious and creepy.

Of course, some B&B fans would rather see Aunt Steffy Forrester (Jacqueline MacInnes Wood) take Douglas in. She does have a special bond with the kid and is an actual family member. Unfortunately, Steffy isn’t featured enough right now to take on that role in Douglas’ life. Besides, having a “Lope” vs. Thomas battle creates more drama.

As Thomas goes after Brooke Forrester (Katherine Kelly Lang) and other members of the Logan clan, Hope and Liam will find it appalling. The Bold and the Beautiful spoilers say Hope will refuse to stand by and let Thomas hurt his son. She’ll be convinced that’ll happen if they let Thomas get too close again.

Hope will urge Liam to back her up on this, so he’ll assure her he’s all in. They’ll plan to do whatever it takes to protect Douglas – and that’ll mean going to extremes. B&B viewers can expect some shocking strategies that’ll really rile Thomas up. That could involve legal efforts to cut Thomas out of the picture as well as any other way they can think of to control him.