The Bold and the Beautiful Spoilers: Liam and Hope Turn Against Each Other – ‘Lope’ Finally Blows Up, Steffy Gets Her Man

BY Heather Hughes on December 6, 2019 | Comments: one comment
Related : Soap Opera, Spoiler, Television, The Bold and the Beautiful 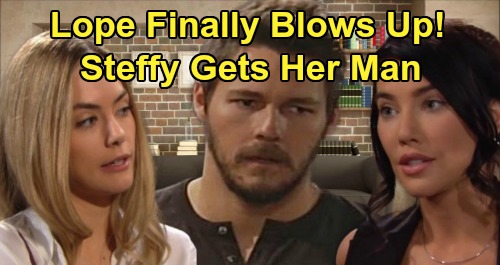 The Bold and the Beautiful (B&B) spoilers tease that Hope Logan (Annika Noelle) and Liam Spencer’s (Scott Clifton) breakup is inevitable. Let’s look at a few crucial reasons why and prepare for the romantic drama ahead. For starters, Liam and Hope have had a good run as far as soap couples go. They’re long overdue for a split by now since B&B tends to shake things up pretty often.

There’s also the matter of chemistry and just overall appeal. Hope and Liam are nice enough together, but do most viewers really want to tune in for nice enough? Soaps should be all about sizzle and sparks – and “Lope’s” arguably lacking in that department.

It’s not that Liam and Hope are a bad couple. They’re a good match in terms of their beliefs and personalities, but that’s doesn’t add up to a lot of excitement. There are also story-related reasons for why Hope and Liam are headed for a split. The Bold and the Beautiful fans know Liam is always going to have a strong connection to Steffy Forrester (Jacqueline MacInnes Wood). As that connection deepens once again, it’ll inevitably pull him further away from Hope.

There’s already a hint of tension and distance in “Lope’s” romance. It’s nothing extreme so far, but Liam is definitely uncomfortable with Thomas Forrester’s (Matthew Atkinson) permanent co-parenting link to Hope. Liam and Hope’s troubles are only going to get worse as Thomas reels Hope in with more tricks.

During the week of December 9-13, Liam will find himself frustrated with Hope. As Hope begins to let her guard down with Thomas, Liam will feel like it’s a huge mistake. He’ll warn Hope about putting herself in a risky situation, but Hope won’t have the same point of view. She may argue that Thomas is genuinely making an effort and defend him to Liam.

Naturally, Liam will feel like Hope is being naïve and ignoring critical warning signs. He just won’t understand why Hope can’t see the pattern and choose to protect herself. Naturally, Thomas can keep playing the part of a doting daddy who wants to do the right thing. It also looks like he’ll cook up a scheme to make Hope jealous with a little help from Zoe Buckingham (Kiara Barnes).

Liam will turn to Steffy for assistance as they try to crack the case of what’s going on. Even these Bold and the Beautiful spoilers alone are pretty indicative of how things will turn out. It’s easy to see how the show’s pushing Liam toward Steffy and inching toward the end of “Lope.”

What will be the final straw? There’ll surely be a breaking point that convinces Liam and Hope to go their separate ways. Perhaps Thomas will make Hope see that Liam’s just going to waffle like he always does. He may persuade Hope to open her heart to someone who will love her and only her – that someone being Thomas of course.

Then again, Liam might decide he’s done trying to get through to Hope. It could even be a combo dumping since they’ll both probably be exasperated with each other. No matter how “Lope” finally blows up, destruction indeed seems imminent. We’ll give you updates as other B&B news comes in. Stay tuned to the CBS soap and don’t forget to check CDL often for the latest Bold and the Beautiful spoilers, updates and news.