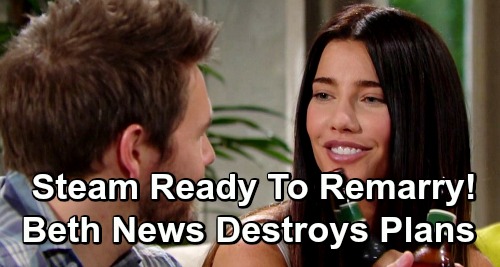 The Bold and the Beautiful (B&B) spoilers tease that Liam Spencer (Scott Clifton) will quickly grow closer to Steffy Forrester (Jacqueline MacInnes Wood) again. He’s already finding it easy to settle into this life with Steffy and the girls. Liam is naturally still dealing with some sorrow thanks to his split from Hope Logan (Annika Noelle), but each day will get a little brighter with his “Steam” family.

B&B fans know Liam isn’t the kind of guy who likes to be single. He’s the marrying type and it probably won’t be long until he marries once again. Liam seems to find peace and stability in making a lasting commitment – even if that commitment doesn’t last as expected. When it comes to Liam, he likes to put a ring on it and cling to the loyalty of a loving wife.

Of course, Steffy wasn’t so loyal when she cheated with Bill Spencer (Don Diamont), but that was then and this is now. Liam and Steffy have both been through a lot since that betrayal. They’ve experienced deep pain and grown because of it. Now that they have a shot at a romantic reunion, Steffy and Liam ultimately won’t want to let it pass them by.

Liam’s already living under the same roof, so it’ll be simple for them to fall back into a familiar groove. The Bold and the Beautiful spoilers say love will bloom as anticipated, so a proposal could be just around the corner. Liam may not see it as rushing into anything since they already know each other so well. He’ll most likely view this as something that just feels right.

Steffy might have some initial reservations since Liam’s fresh off his annulment with Hope. At the same time, being married to Liam again would be a dream come true. The Bold and the Beautiful spoilers say this picture-perfect family will start coming together. If Liam assures Steffy that they’re going to be forever this time, you can bet she’ll believe him.

Unfortunately, the truth about Beth Spencer still has to be exposed. That could destroy all the wonderful “Steam” plans they’re set to make. If Steffy ends up finding out and keeping quiet, that’ll be even worse. In other words, The Bold and the Beautiful spoilers hint that this reunion is a disaster waiting to happen. It’s a ticking time bomb that’ll inevitably explode in the worst way possible!

Are you disappointed that Steffy and Liam’s reunion is doomed? Would you like to see happiness for this couple or is it best to send them down different paths? We’ll give you updates as other B&B news comes in. Stay tuned to the CBS soap and don’t forget to check CDL often for the latest Bold and the Beautiful spoilers, updates and news.