The Bold and the Beautiful Spoilers: Liam Devastated By Hope’s Divorce Demand – Seeks Comfort From Wyatt

BY hellodrdavis on February 23, 2019 | Comments: one comment
Related : Soap Opera, Spoiler, Television, The Bold and the Beautiful 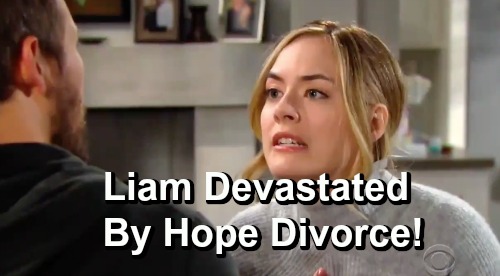 The Bold and the Beautiful spoilers tease that Hope Spencer’s (Annika Noelle) downward spiral will continue on new B&B episodes the week of February 25 to March 1. She’s still reeling from the devastation of losing her daughter Beth Spencer. The whole ordeal has been hard on both Hope and Liam Spencer (Scott Clifton), but Hope is really taking it hard. And unfortunately, in her grief she’s starting to push Liam away.

It started out as a few simple urgings for Liam to go spend time with Seffy Forrester (Jacqueline MacInnes Wood), Kelly Spencer (Chloe Teperman and Zoe Pennington), and Phoebe Forrester (Isabella de Armes and Redford Prindiville). It seemed at first like a generous thing for Hope to do, but now it seems that Hope is starting to question her entire marriage to Liam.

Hope told Brooke Forrester (Katherine Kelly Lang) that she felt guilty for keeping Liam from being a full-time father to Kelly, and even to Phoebe. Hope thinks that she is responsible for keeping a family from being together, and that really bothers her.

According to B&B spoilers, Hope will soon make a decision about her marriage. It certainly sounds like she’ll suggest that divorce is an option and will offer to set Liam free to be with Steffy, Kelly, and Phoebe. Of course, Liam won’t go for that, and he’ll tell Hope in no uncertain terms that he’s committed to her, period.

But it doesn’t look like that will be the end of the discussion. It seems that Hope will persist in her idea that a divorce is the best option for everyone, and in particular for the children. Liam will be devastated, and he’ll turn to his brother Wyatt Spencer (Darin Brooks) for support. But there won’t be much Wyatt can do for Liam except to listen and offer advice.

Liam will pour his heart out to his brother, and he’ll likely express how helpless he feels by the whole situation. All he wants to do is help and comfort Hope, and he’ll be horrified that she’s now pushing him away. Wyatt will probably urge Liam to not give up on Hope and to continue fighting for what he wants.

Wyatt seems to have pretty good instincts when it comes to Hope, so maybe he’ll have some special advice to give that might help Hope reconsider the decision to end her marriage to Liam. Do you think that Lope’s marriage is doomed? Stay tuned to the CBS soap and don’t forget to check CDL often for the latest Bold and the Beautiful spoilers, updates, and news.