The Bold and the Beautiful Spoilers: Liam Driven Away from Hope and Back Into Steffy’s Arms – Thomas Achieves Twisted Victory? 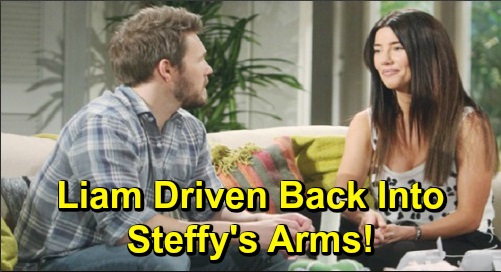 The Bold and the Beautiful (B&B) spoilers tease that Thomas Forrester’s (Matthew Atkinson) sneaky plans could affect several characters’ romantic futures. Brooke Forrester (Katherine Kelly Lang) and Ridge Forrester’s (Thorsten Kaye) marriage is in trouble anyway, so it’s not a stretch to think Thomas will push them into divorce territory.

However, Thomas could make Hope Logan (Annika Noelle) his next target, which could cause an even bigger chain reaction. Will Thomas sabotage Hope and Liam Spencer’s (Scott Clifton) relationship next? Liam and Hope are on solid ground at the moment. They’ll unite against Thomas to keep Douglas Forrester (Henry Joseph Samiri) away from his father, so that’ll give Thomas even more of a reason to destroy their bond.

Thomas will inevitably want to hurt Hope like he’s been hurt. That’s a twisted way of thinking since Thomas manipulated Hope into marriage and caused plenty of pain. He’s refusing to see that he caused most of the damage here, but that’ll make for some good B&B drama. The Bold and the Beautiful spoilers say “Lope” could take some serious hits.

Of course, Thomas could also view pushing “Steam” back together as a way to make things right for Steffy Forrester (Jacqueline MacInnes Wood). Steffy lost “Phoebe Forrester” aka Beth Spencer (River Davidson and Madeline Valdez) along with her chance to reunite with Liam. Thomas may view breaking up “Lope” and pushing Liam back toward Steffy as a win-win. He hates Liam’s guts, but he could consider it as the ultimate way to stick it to Hope.

The Bold and the Beautiful spoilers say Thomas will hold nothing back in his quest for vengeance. The destruction of the Logan clan will be his priority. Thomas will want them all to pay for their hypocrisy – although he doesn’t seem to see his own! Nevertheless, Thomas’ actions could create a ripple effect that leads plenty of people down different paths.

Will Steffy, Liam and Hope face some romantic shakeups as a result? Will Liam split from Hope and head back in Steffy’s direction? It’s certainly a possibility to consider as Thomas’ mayhem looms. We’ll give you updates as other B&B news comes in. Stay tuned to the CBS soap and don’t forget to check CDL often for the latest Bold and the Beautiful spoilers, updates and news.